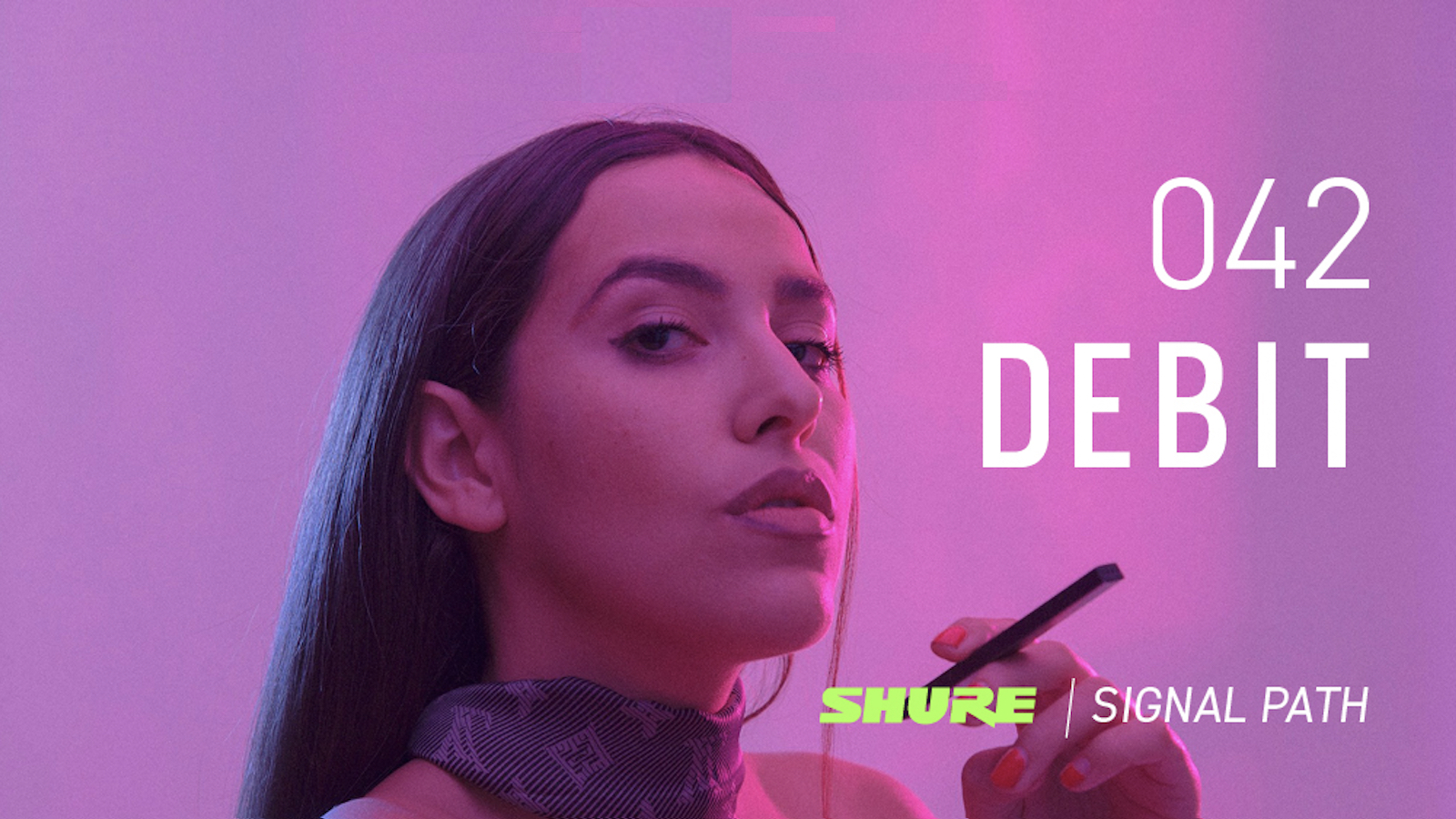 In a special Signal Path episode, Kieran Yates spoke with Delia Beatriz, a New York-based producer and DJ going by the name Debit. Known for mixing Mexican club rhythms and industrial sounds to create avant-garde techno, she was nominated by Holly Herndon to be an inaugural member of Shure24 – a platform celebrating audio culture innovators. In the podcast, Debit discusses how moving from Mexico to the United States influenced her tastes, the impact of technology on music and what it was like being named a Shure24 Audience Choice winner.

Kieran Yates: Hey Debit, congratulations on winning the show 24 Audience Choice award. How are you feeling about it?

Debit: Thanks. I'm feeling great about it. It was a really exciting and thrilling ride.

And you were chosen by Holly Herndon. What was your relationship with her before? Were you aware of her or at all?

Yeah, absolutely. She is as close to an idol as I have. Her work with A.I. and the way she has managed to relate creatively and interface with the wider public has been really impacting to me. And I'm a huge fan. And it was probably one of the highlights of my whole career that she nominated me.

Oh, that's so great. Is that kind of particular work that you were aware of?

Well, currently I'm pursuing a master's degree in music technology, and I'm also trying to figure out ways in which I can serve sort of creative purposes. I'm focusing a little bit more on music information retrieval. But Holly is like a huge inspiration in terms of metaphor, like how to relate to these technologies in metaphors so that it can be expanded and appropriated into our own practice. I also think her output is really beautiful. Because I've seen a lot of work, especially in the economy, that falls flat in terms of the emotional impact, and Holly's work makes me cry sometimes.

And is your sense that people are more interested in fusing AI and music tech?

I think it's still quite novel. I think a lot of AI is still very juvenile stage, so to speak, in terms of like the creative applications, like the way at least we see the neural networks or the models, like the outputs are numeric. So Holly, I definitely believe, is a pioneer in this realm of integrating it into like what we know as music and like what resonates socially, you know? It's either like the Matrix on this kind of like weird, futuristic, bleak dystopia or like binary code, really boring. Everything doesn't work.

For people who are kind of listening and might not fully understand some of the work that you do, how would you best explain it?

Yeah, I'm an electronic dance music producer and I also have a practice in ambient. I work both with gear and just in the box and I perform. And that's how I would describe myself, a producer and a performer and a DJ.

And what track would you say really sums up what you do best, ‘Numbering’?

I think it has a tribal beat, which is the subject of my last EP, actually. And I just have a lot of raw sounds and it's trying to use these bare elements. Yeah, ‘Numbering’ it features DJ Earl, who's a brilliant producer and my whole System EP because it's sort of like rhythmic but also industrial and it's stripped off melody and it just sort of refocuses on the textures. And that's kind of like my vibe right now.

Tell me a little bit about the way you grew up and the music that surrounded the tracks that take you back to being younger.

I had a really unstable youth when I was 13. We moved from Mexico to the Midwest to the United States. I'm from northern Mexico, from Monterrey. It's about 200 miles south of the border. So there in Mexico, I think a lot of the music consumption was passive import, like whatever would get exported to the country and like would make it to the CD stores. I remember going to the record store because you could hear you could open the CDs and listen to them. So growing up, I think I had like a very basic taste.

And what about when he started discovering music for yourself? What did you gravitate towards?

I think the first stuff that was really interesting was when I discovered trip-hop and Tricky because I thought it still sounded like something familiar, but like the way they drove the sound and the use of synths such at the forefront, not just like as a tool of the studio, but like it was such a voice. It really hit me.

Listen to the full interview with Debit and subscribe to Signal Path with the podcast provider of your choice below.