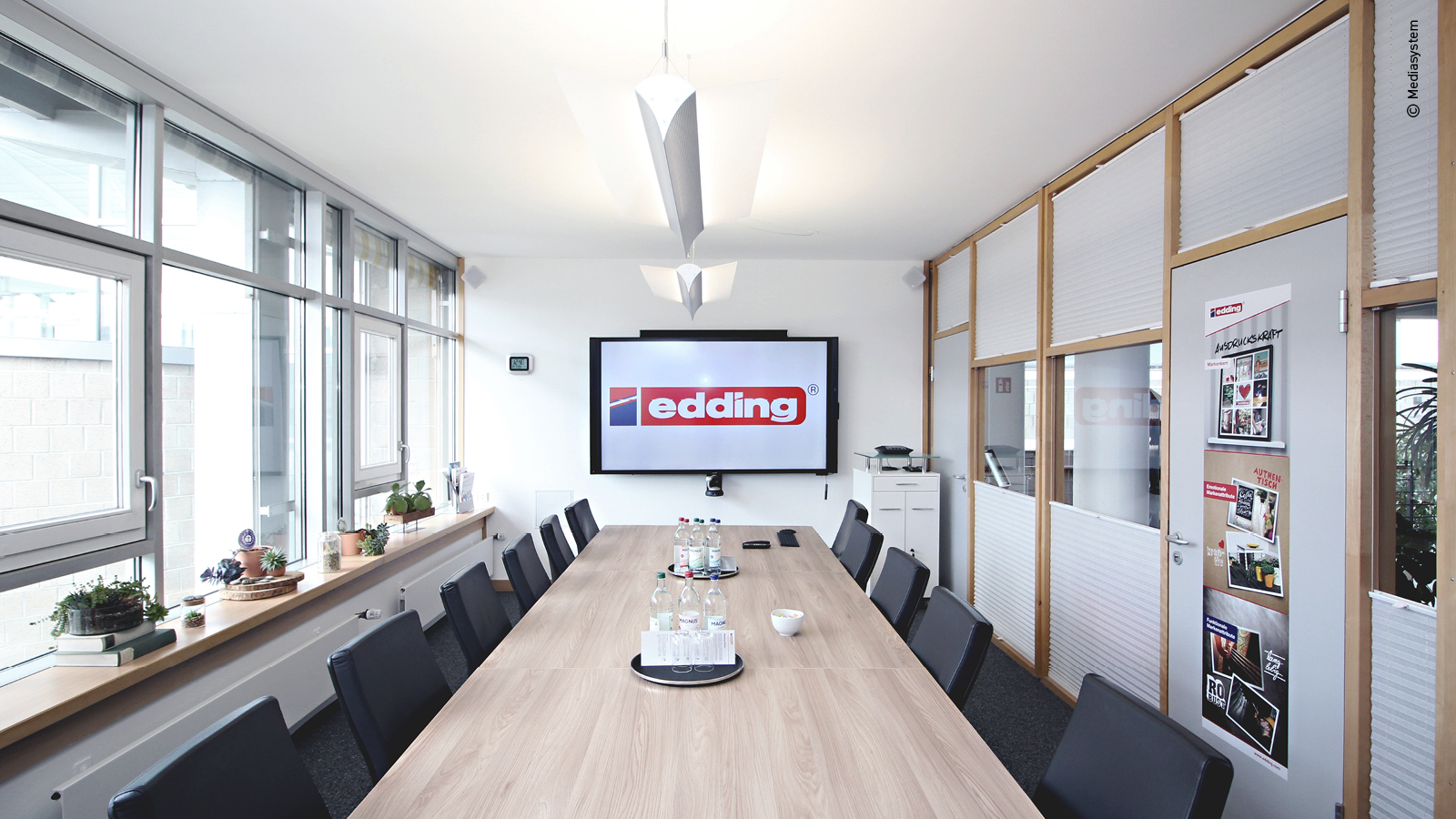 The edding Group is known for its brands edding, which makes markers and other items for applying permanent coloring to surfaces, and Legamaster, which focuses on visual communication products. edding AG employs over 650 people – the majority of whom work at the company''s headquarters in Ahrensburg near Hamburg. The corporate HQ has a canteen, coffee bars, conference rooms and training spaces, which are frequently used for all kinds of official meetings, as well as for more informal communication.

As part of a modernization project, edding commissioned Systemhaus Mediasystem to update the conferencing technology for the firm's meeting spaces and a large training room. The new concept needed to work with existing equipment and be integrated into the current technical infrastructure.

Soon, video conferences will be able to take place in the best possible quality, regardless of the room size. The new products were selected in cooperation with Shure to provide standardization across all locations in order to offer a familiar user environment at all edding offices.

The MXA710 – a linear microphone array from Shure – was selected as the solution for the two conference rooms at the headquarters and was installed directly near the display. In the large Legamaster training room, two ceiling microphone arrays from the Microflex Advance series (MXA910) also ensure speech intelligibility remains constant, even for participants in other locations, when speakers move around the room or make contributions from different seats. For the same reason, two MXA910 ceiling microphone arrays were installed in the large conference room at the Wunstdorf site. In four smaller rooms, the decision was made to use one linear microphone array (MXA710) each as the optimal solution due to the smaller room size. The Vienna branch also received an MXA710 to match the new company standard and provide particularly uncomplicated communication between the different locations.

The microphones are connected via ANIUSB Interface so that any common video conferencing platform can be used and participants can quickly and easily connect their laptop or mobile device. The new media technology was connected to the existing infrastructure via a Crestron media control system, whereby the room technology is also integrated.

With the new Shure Microflex Advance microphone arrays, edding is always optimally prepared for the next conference. The sleek, linear form factor allows for placement virtually anywhere in a meeting space, including on a wall, at the display, ceiling, or into a conference room table.

In addition, the Microflex Advance system is characterized by its outstanding reliability and ease of use and integrate seamlessly into the interior design, without any annoying cables.