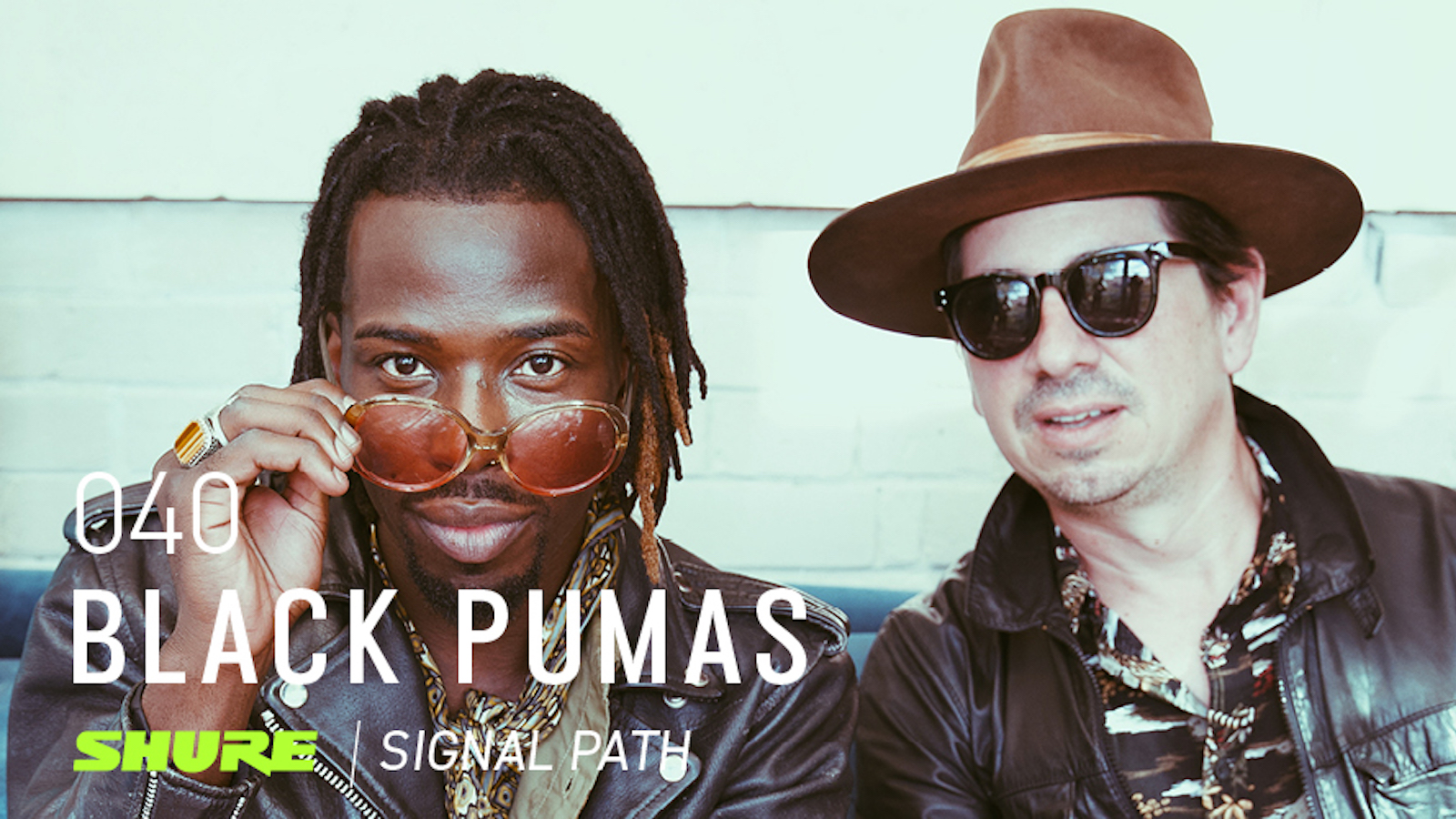 For the latest episode of Signal Path, Marc Young spoke with spoke with Adrian Quesada and Eric Burton, the musicians behind the Grammy-nominated soul band Black Pumas. In the podcast, they discuss how they first met, how they've been keeping busy during the coronavirus lockdown and some of their more creative approaches to songwriting. This episode was recorded remotely with the MV51 digital condenser microphone.

Marc Young: Adrian Quesada, Eric Burton, thanks so much for speaking with me today. How is it in Texas right now?

Eric Burton: We're pretty good. Just hanging tight, you know, hanging with family and doing our best to create the music from our own homes.

Yeah, I definitely want to get into that. But I guess let's start at the beginning. When I was researching for this interview, I saw you guys called psychedelic soul. Is that a term you'd use to describe your music?

Eric Burton: I think that's a term that, you know, everyone else uses to describe our music. Adrian, I don't know how would you describe it?

Adrian Quesada: I mean, it's like too hard to me to really describe music. And I think it's fine. You know, if it helps paint a picture for people. It's too complicated to really talk about or to really come up with this long description of what we do. So it's as good as any.

OK, how did you two arrive at the Black Pumas sound? Was it just something very organic, two parts came in together, or was it a real conscious choice?

Adrian Quesada: I would say it was pretty organic, honestly, man. You know, I was already kind of working on some production, on some instrumentals when I met Eric and his songwriting just happened to fit perfect with this canvas of a production style that that I was working on. So it was all pretty organic.

We didn't really even discuss too much of referencing a certain era or anything. I think if anything, we both probably generally listen to the older music more than we do contemporary music. But we also I don't think either of us rule out anything or are trying to be super retro or anything. You know, if they put good new song, contemporary song comes out, you know, I'll listen to it. And I’m guessing Eric probably feels the same.

Eric Burton: Yeah, I think one of the things that I remember Adrian saying in our beginnings collaborating, he was saying, “I kind of always wanted to play guitar in a soul band, kind of an outfit.” And I think that with that, a lot of the music was reflective of soul music as it pertains to its evolution by way of hip-hop. And I would say that I was a little bit more off the beaten path of, feeding to soul music and hip-hop music standardly in the structure of it. I was just kind of a songwriter and just making whatever moved me in the moment.

Adrian, I'm on the other hand, I feel had a little bit more of a specific approach getting to the sounds and the tricks, so to speak, that he's learned and being reflective of that style of music. So, yes, what I think it makes the that makes it most interesting to have that kind of clash with the world that I come from and just creating something that I had no idea what I was. I was just trying to write a song that would, you know, be reflective of how I was feeling without necessarily needing to a specific genre or artist or whatever. But obviously we're inspired by a lot of the same music. And, you know, it feels really warm there.

Well, I mean, let's dial back and get into those early influences that you brought into the project. Eric, I read that some of your earliest music experiences were connected to the church. Was that straight up gospel stuff? Can you tell us a bit about that?

Eric Burton: Yeah, man, when I was growing up, some of the some of these music channels would always be on and so I was just always surrounded by the music. You know, my mom and my aunt, my uncles, they're all writers, singers, dancers. So, you know, I come from a very theatrically inclined household. So, you know, I kind of grew up really enjoying Nat King Cole.

And as I was introduced to some high school buddies, I kind of got into skating a little bit. And I really liked Nirvana and got into the Beatles a bit. Neil Young. And Al Green was like one of my favorites kind of coming out of that that phase of my life. When I got my first car, I used to cruise around listening to that kind of stuff. And when I moved to Austin, it's like, man, this is a city that really respects the older music how they used to make it, so to speak.

And so there's a there's a little bit of warmth that we kind of inherited just by being in this city. Yeah. Like Adrian said, I feel like it's we come from a very eclectic backgrounds in our music listening, being fans also of soul music and hip-hop.

Listen to the full interview with Black Pumas and subscribe to Signal Path with the podcast provider of your choice below.