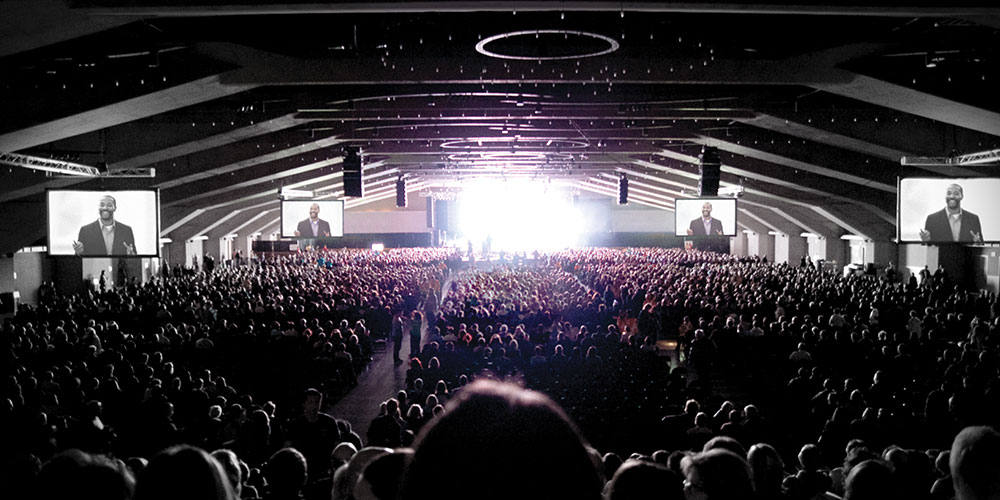 How They Made the Transition

How well we remember the days gone by when the airwaves were filled with news of a digital tsunami and the end, as we knew it, of analog television. For consumers, it meant the addition of a set-top box and a never-ending stream of public service and cable provider TV spots. And instead of portending a bright new digital future, there was something about the transition that seemed a little bleak.

In the fall of 2008, this was especially true for users of wireless audio systems. The Federal Communications Commission unanimously passed its long debated "white spaces" rules, paving the way for the deployment of new unlicensed wireless devices (like smartphones, for instance) between the newly assigned digital television channels.

There were serious concerns about interference, licensing, and equipment obsolescence. Led by Shure, the pro audio community went to Washington, debated with a powerful coalition of consumer product manufacturers, retooled product lines, and worked tirelessly to represent the rights of wireless audio users. Those users included everyone from Broadway producers to the National Football League … and you.

Fast forward to June 12, 2009. That's the date when the analog TV signals officially signed off. Then, approximately one year later, wireless mic systems were no longer permitted to operate in the 700 MHz band.

And here we are. With all the sound and fury, the hand wringing, the lobbying efforts, the white papers and the worry … what really happened? Did churches large and small return to the days of wired sound? Were mobile apps jamming the airwaves? Was interference a fact of wireless life? Did entire systems hit the scrap heap and call for emergency budget meetings to fund new systems? Was the praise band sent home?

For the answers, we talked to experts at two distinctly different churches – Ron Gibson at Eagle Mountain International Church, in Fort Worth, Texas and the Bob Abraham, Shure Associate and volunteer at Vineyard Church (planted in Shure's former Hartrey Avenue headquarters) in Evanston, Illinois.

Meet Ron Gibson. Along with Robert Price and Paul Hayden, he is responsible for live sound reinforcement in the big room at the biggest church in the Kenneth Copeland Ministries. Across the sprawling Fort Worth campus are eight venues and eleven rooms – all needing audio assistance from a full time staff of three and a battalion of fifteen volunteers.

"Back in 2008, we heard the announcement that there might be some changes – and we really paid close attention to it because here in the northwest Dallas/Fort Worth area, there's a lot of stuff going on. We realized by looking at the anticipated changes in the frequency band that we were going to get hit pretty hard.

At that time, we were running 27 channels of wireless mics and six channels of IEMs – and that was across our facility. We had 12 channels of wireless in our main sanctuary, and we had three channels of wireless IEMs. We started experimenting with different manufacturer's wireless systems and even before the transition, were getting hit with interference, not in a major way, but enough to convince us to jump on the bandwagon in December 2008. We didn't want to have problems.

We changed out our main sanctuary with 14 new channels of wireless mics from Shure (UHF-R®, which we thought were the best we could get for our building) and we also got 14 handheld mics and bodypack transmitters, so we actually bought 28 new wireless microphone systems. This gave us the flexibility to do what we needed to do in terms of performance, too – drama, singing or any combination.

We thought about sharing the outdated 700MHz equipment with some of our smaller churches rather than turning the equipment in for the Shure rebate, but of course, we'd only be putting them in jeopardy with the FCC's rulings, so we didn't end up doing that.

Shure had a good rebate program and that helped us to make the change as early as we did. Even so, we ended up spending about $30,000 in the main sanctuary.

Today, we are using 35 wireless microphone channels and about 10 channels for wireless IEMs across our entire facility. These are all Shure systems and we haven't had one problem. Not one.

We stay on top of it. Every time we turn something on, we're monitoring it. We actively coordinate frequencies. We scan our microphones every couple of weeks to make sure that nothing else has changed. And even though I'm running 45 channels of wireless, this holds true for the guy that had two channels of wireless in his building. You never know in this technological world we're living in who has what. The days of just installing something and leaving it alone are over."
Vineyard Church—Evanston, Illinois

"I started on the team just about the time of the 700MHz transition. Vineyard's story is pretty typical in that there was no one on the full-time staff aware of the White Spaces issue. These were people who weren't necessarily hooked in to the audio industry and unless they were subscribed to publications and chat rooms, they had no way of knowing. Still, before I arrived, a couple of volunteers sounded the alarm. At the time, Vineyard had two Shure UHF systems.

On a typical Sunday, we only use about two channels of wireless. The original A/V designers probably wanted to make the system very volunteer-friendly. But now that I'm here, I'm planning to integrate more wireless into our services.

We were in kind of a panic mode in January 2009, because the 12th of February was the original deadline. We had two wireless systems to replace and really had to scramble. I was able to use my Shure employee discount to get two ULX® systems for the church. We still have that old 700 MHz system in a rack somewhere, but, of course, it's not being used."
And?

"We've been really happy with the ULX system. One of the concerns we had is with battery usage because the system uses standard alkaline batteries. We go through batteries very quickly, so one of the things we did is to switch to rechargeable batteries. That's saved us a lot of money.

With all the advantages that wireless systems have, there's also a lot more responsibility on the tech crew because there are more things that can go wrong – from dealing with batteries and interference to sound sources going out of range, even things that you wouldn't expect to be a problem like two transmitters being too close together. The crew has to know about wireless and not just about audio.

Especially now, spectrum management has to be part of the team's learning curve, but fortunately, companies like Shure offer all kinds of online resources: how to set up a system, how to do frequency coordination, geographic frequency finders … just a lot of helpful information. In some ways, things really haven't changed that much. Wireless microphones still operate on many of the same frequencies – it's just a matter of the other devices in the spectrum.

The wireless transition is in reality a lot less frightening than people may think. It still remains to be seen how many of the White Spaces devices are going to appear and how much real havoc will be created because of them. In the short term, all of the wireless systems are going to work just fine."

Today there are nine pastors ministering to the needs of a multi-cultural, multi-generational population. In addition to weekly church services and Sunday school, Vineyard runs a teen drop-in center (complete with a drum kit and an XBOX console), as well as The Harvest, a food and clothing pantry that serves 150 local families every week.

There's plenty of unused space in Vineyard's present location, but this church likes to know every member of the congregation. That's why the congregation has successfully planted six new churches in the general area. Here is one of Vineyard's stated goals:

"We value ministry (giving, relating, and loving) as the primary activity of the church and want everyone to participate in some way."

We think that Mr. Shure would have liked that.
Church Correspondents

Bob Abraham is manager of Digital Audio Processing at Shure Incorporated, developing DSP and Networked Audio products. He has a B.S. in Electrical Engineering from the University of Houston and a M.S. in Music Engineering from the University of Miami. He has designed and operated church sound systems for many years and currently leads the audio tech team at Vineyard Christian Church of Evanston.

Ron Gibson is a full time engineer for Eagle Mountain International Church and Kenneth Copeland Ministries. In addition to his duties as monitor engineer for the main sanctuary, he has consulted on the design and specification of the church's state-of-the art Conference Center. Prior to EMIC, Ron operated Word of Faith Tape and Sound and applied his considerable audio talents to a wide spectrum of national and international events, including the World Cup, Super Bowl half-time performances and the dedication ceremonies surrounding the Richard M. Nixon Presidential Library. And as exciting as those gigs may seem to the rest of us, Ron says he's right where he always wanted to be.