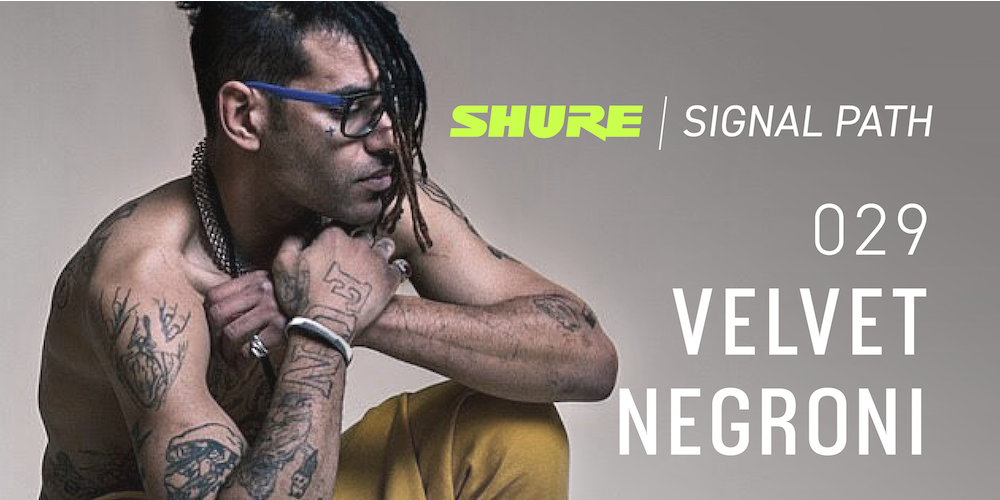 Eclectic yet cohesive, the future-forward R&B of Jeremy Nutzman has attracted the attention of Bon Iver’s Justin Vernon, Tame Impala and Kanye West. After dabbling in several short-lived projects spanning multiple genres, the Minneapolis-based singer and multi-instrumentalist seems to have finally found his groove as Velvet Negroni.

His latest creative incarnation draws on indie, dub, electronica and more, yet still manages to avoid sounding pieced together. Nutzman instead skillfully blends these diverse elements into fluid tracks on his accessible new album Neon Brown. But it wasn’t a conscious decision to take a new artistic direction that lead to the breakthrough, it was simply taking the reins of his personal life and career.

“What’s different is that it’s my project this time,” Nutzman says ahead of a show in Berlin kicking off his first European tour. “In the past, I would find myself in these musical marriages and they were all pretty unhealthy ones.”

Over the course of the next hour, he speaks freely about everything from his previous struggles with substance abuse to his sheltered upbringing as the adopted son of strict evangelical Christians.

Though his mother made him take classical piano lessons, giving him an early classical foundation, his parents also severely restricted his access to regular pop music. This left him culturally isolated until he found a box of abandoned CDs when he was 15. Treating it like the treasured contraband it was, he would secretly listen to everything from grunge gods Soundgarden to pop diva Mariah Carey.

“I would climb up into my buddy’s treehouse and would sit there with a CD Walkman and listen to this stuff,” he says. “And it was just amazing to me. Because it’s so forbidden, you know?”

But instruments remained something to be perfected within the confines of the school band or classical recitals rather than a source of inspiration. It wasn’t until he was 17 or 18 and came up with an unexpected lick while practicing his euphonium – a sort of smaller tuba – that he realized he could also create music as well as simply read it from a page.

“It kind of blew my mind,” Nutzman recalls. “Until then I had been playing other composers, replicating their work as best as possible. It was just kind of like athletics.”

At some point he started making beats on a computer at home. From there it wasn’t long before he had joined the local noise scene, eventually becoming a member of Marijuana Death Squad. Several projects later came Pony Bwoy, which combined hop-hop and R&B with dance music. But just as they seemed to be getting some traction, the duo succumbed to druggy distractions.

Realizing he needed to straighten himself out, he set off on his own. But Nutzman still wasn’t entirely sure of where he was heading musically. Things started to coalesce after his first album as Velvet Negroni, but only really took shape after collaborating with two producers, Psymun and Tickle Torture, on Neon Brown.

Described alternatively as dreamy trap-soul or dubby-dark R&B, the album has a remarkable sense of space. Tracks like “ONE ONE” and “CONFETTI” are sparse but in no way empty. Nutzman instead makes use of the negative space to draw listeners in with his reverb-heavy vocals and delicately constructed soundscapes.

His lyrics allude to both his past predilections and his present desire to achieve success. Lines from the upbeat number “WINE GREEN” include: This time wonderful on my own/I lean in for it/limelight so narco.

With other songs showing clear new wave and trip-hop leanings, how does Nutzman describe his music? “I try not to,” he says. “But I tell Uber drivers I make ‘experimental R&B’ when they ask what I’ve been doing in the studio.”

Fortunately, it’s not just Uber drivers taking an interest in what he’s doing. Besides catching the ear of Shure24 curator Santigold, Nutzman has found an important champion of his talent in Justin Vernon. The fellow Midwesterner asked him to contribute to the most recent Bon Iver album and also pushed one of Nutzman’s songs at a songwriting camp for Kanye West. The track “Waves” from the first Velvet Negroni record would eventually end up inspiring the West-Kid Cudi collaboration “Feel The Love.”

Nutzman describes working with Vernon as a uniquely positive experience: “It's a real free-flowing sort of creative atmosphere that he manages to float around him at all times. He's always really interested in making sure that everybody's voice is heard and that everybody gets a chance to really try and express themselves.”

Another recent milestone was opening up for Tame Impala at the Australian psychedelic group’s massive Madison Square Garden concerts in New York City last summer. He has called doing those concerts “humbling” and important for learning how to replicate the album with a full band.

His small club show in Berlin on a cold and drizzly Sunday evening couldn’t be more different. The crowd is only there for Nutzman, who is performing with just his producer Elliott Kozel, alias Tickle Torture, on the decks. But the urge to keep progressing is the same.

“We’ll be trying out some different stuff that we couldn’t do with the band,” he explains before going on stage. And being on the road, he finds, is conducive to his creativity. “I think it's definitely good for the mind.”

Listen to the full interview with Velvet Negroni and subscribe to Signal Path with the podcast provider of your choice below.