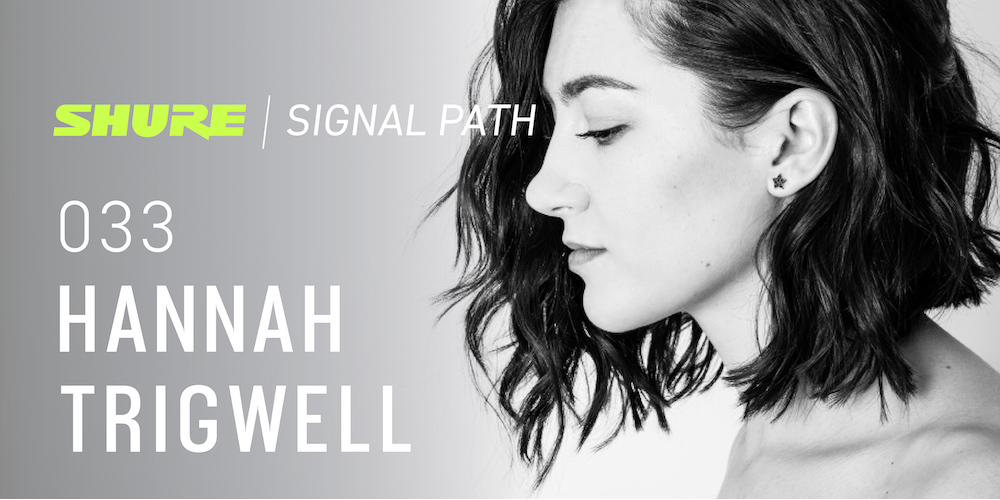 For the latest episode of Signal Path, Marc Young spoke with Hannah Trigwell, an English singer-songwriter who started out busking the streets of Leeds before finding legions of fans online. In the podcast, Hannah talks about being an independent artist in the age of social media, how that affects her creativity and what it’s like interacting with her fans via the internet.

Marc Young: Hannah, thanks so much for speaking with me today.

Hannah Trigwell: Thanks for having me.

We're here at the Montreux Jazz Festival. I know you were here last year as well. What's your impression this time now that you're a veteran?

I think it's awesome. It's a very different kind of festival to the festivals that I've been to, especially the jam sessions part of it in the House of Jazz. That feels so old school. It's crazy when you go in there, cause sometimes some massive artists come in and just do an impromptu jam when you are watching are in the audience. There's nothing like purer than that because you know that they're just doing it for the love of it. You can see that they're having as much fun as the audience. Usually a festival, when there's a massive audience and someone's on the main stage, there’s slightly less connection, it's not as intimate. So I really, really love that about this festival, because I've never seen these legends I look up to in such close proximity, which I think is really cool.

You already have a career spanning a decade because you started so early. You're self-taught guitarist. So how was it that you were starting out busking in the streets of Leeds?

So I was just saw playing in my bedroom, playing covers and stuff before I started writing my own songs. And then I just wanted to get a different or bigger audience. So I was trying to figure out a way to do that. And at the time I was getting a lot of no's from local promoters to put on a local gig because I didn't really have any fans. No one was going to come. But this is all before YouTube. So I just wanted somebody to listen to me. I was walking past this busker in my hometown and just asked him if I could have a go. And he said no.

And then I walked past him again and was like, “Please, can I have a go? Keep the proceeds, whatever.” And he is like, “Yeah, okay. Play one song.” And then I played “Fast Car” by Tracy Chapman. And just a few people started to stop. And I had this moment where I was like, this could be a thing I do…

So I took a year out before I went to university and I was busking. Pretty much every day really intense. But I just loved it so much. That was sort of like how I'd got my local audience and people who would come to a local gig and I was thinking like it would be really cool to take it further afield. So when I discovered YouTube, I was like, “Oh, that's a way to do it.”

Let's go from the mean streets of Leeds to the mean virtual streets of YouTube. Can you just maybe describe how you first started to use it?

Yeah. So I was I think the first couple of it is that I saw on YouTube were really random videos that you would now refer to as vlogs, which just seemed so strange at that time because nobody was really doing them. But yeah, the first kind of artist that I saw on YouTube playing the song live was Boyce Avenue. And they're now the most huge independent act in the world. But back then, they didn't have so many views just because YouTube wasn't a big thing.

I mean, I even wasn't sure it would take off, to be honest. But I saw in their comments that they were getting feedback, positive feedback and maybe constructive criticism from people all over the world. And that's why it clicked in my head. I was like, “Oh, you can get an international audience with this.”

Listen to the full interview with Hannah Trigwell and subscribe to Signal Path with the podcast provider of your choice below. You can check out her YouTube channel here.