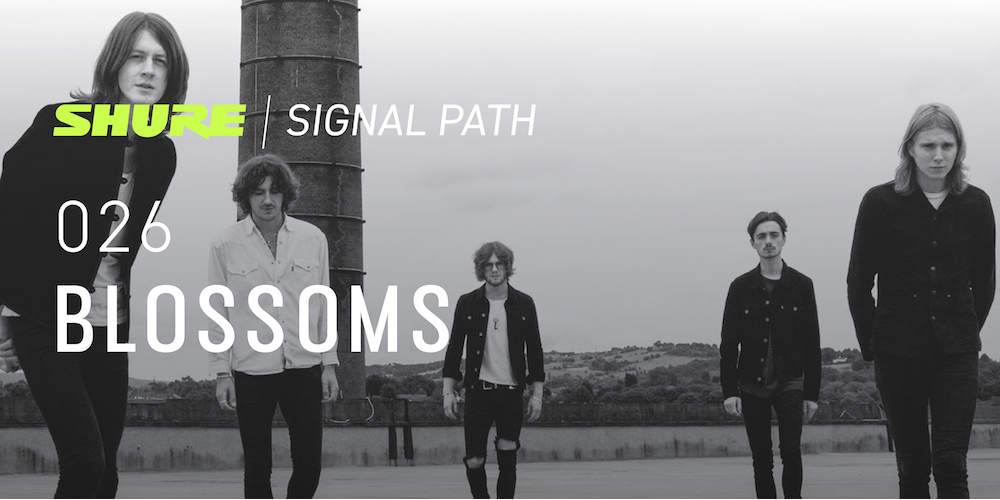 For the latest episode of Signal Path, Mary Spender spoke with Tom Ogden and Josh Dewhurst from the UK band Blossoms. In the podcast, they discuss finding their way in songwriting, learning about music from videogames and selling out an important hometown show.

Tom Ogden: In 2013 I started picking up little tricks: if I was out, I’d look for things to be song titles, or if I'm reading or see a film or something’s in my head. Then, when I go to write a song, I'm not starting from a blank canvas. A lot of the time the songs stem from a song title, which is kind of working backwards, in a way. I think a good song title draws you in.

Do you have a back catalog of things on your phone, like voice memos, which aren’t finished songs but that you can refer to? Or do you just write from start to finish?

Tom: I kind of write start to finish and never go back, because I think if it wasn't good enough at the time and it wasn't memorable enough, it's not going to be memorable. That's the way I kind of look at it. If I'm on a flight, then sometimes I go through all my old ones, and go ‘Oh that’s cool.’ But I never tend to go back, I always look forward.

Do you have chord structures already done to then pass over to Josh to write the guitar parts?

Josh Dewhurst: That's kind of the way, yeah. On lot of our songs, the chorus, hook and melody will be Tom singing that melody, backed by the keyboard doing the same melody and the guitar often doing the same melody, so it's kind of like the wall of sound. Tom’s the songwriter and the song in its skeletal form is still a great song. But then he brings it to us and we work at it together.

Can you talk a bit about that you got the opportunity to do your hometown show in Stockport?

Tom: It’s natural progression for the shows to get bigger. We sold out The Ritz and the Albert Hall (in Manchester) and then we went to the Castlefield Bowl. That was quite a big jump from a 2000 capacity to 8000, and once we did that, we were kind of like, ‘What next?’ We had joked about it: imagine playing a gig there (in Stockport). So it’s 15,000 that sold out immediately, which is crazy. The highlight of our career so far is selling that out so fast.  All our family and mates will be there and, with all the terraced houses around, I think it's going to be a really big moment for us.

Who else has influenced you?

Josh: A huge influence of mine is a dude called Shawn Lee. I first heard of him from a video game, called Bully, which I had on the PS2. The game was great, but what was even better was the music. It was all composed by this one guy, and I thought I needed to find out who this is, even as a kid. I looked on the back of the game and found his name. I'd listen to some of his other music, he's done loads of stuff, plays everything, composed the entire soundtrack for the video game and played it all. So, I thought, this is my kind of guy, because I started off playing drums initially, then bass and then guitar. So I kind of owe everything to Shawn, in the sense that I learned so much from listening to his music.

Tom: For me, growing up, the first band I became obsessed with was Oasis. My mum and dad loved them. My mum had seen them at Maine Road in 1996. I just love the big choruses, the ambition they had as a band and the euphoria of it. It brings back nothing but fond memories. Even now, it’s a go to if I don’t know what to listen to. That was then engrained into my songwriting, because I’d listened to so much of it growing up.

Listen to the full interview with Blossoms and subscribe to Signal Path with the podcast provider of your choice below.