Referencing with Headphones before Mastering 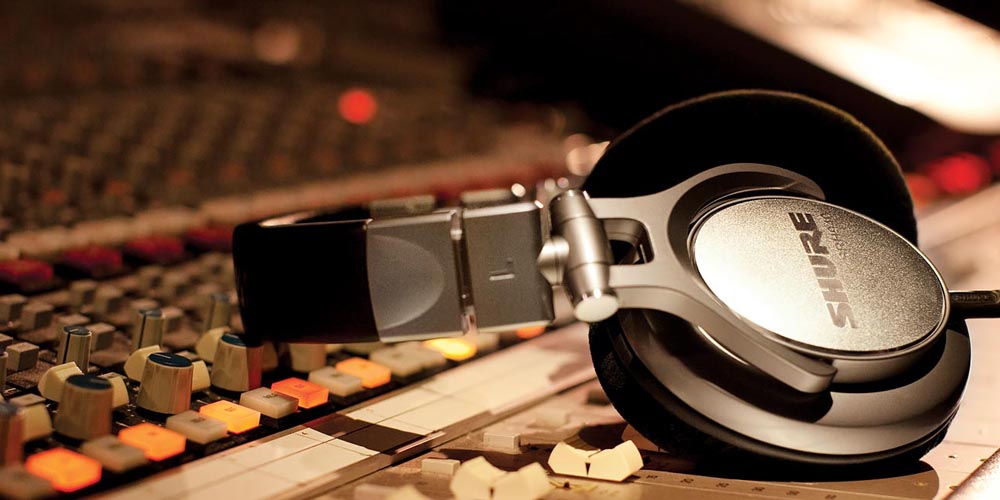 Not too long ago, Shure Notes editors crossed into the sprawling, top-secret world that is Shure's Technology Annex to learn more about the development of its headphone line from Chief Engineer Yuri Shulman.  Naturally, part of that discussion involved a review of the growing headphone line – including those intended for critical listening and mastering: SRH940 and the open back headphone models SRH1440 and SRH 1840.  It was the SRH940 reference headphones that interested us most.  What is it, we wanted to know, that makes reference-grade headphones different?

Here's what we learned: In recording applications, reference headphones are used to determine how well a track is mixed. Reference headphones are a logical choice since they're designed to let the engineer hear everything that's in the mix – as flat as possible – with a high level of accuracy.  The wide soundstage allows the critical listener to make precise adjustments in the mixing and mastering stages.  Their appeal, by the way, isn't limited to the pros.  Audiophiles not attracted to the currently popular bass boost in consumer-grade headphones are fans, too.

Just about the time we were thinking about recruiting a recording engineer for a frontline perspective, Steve Corrao stepped up to the plate.  He runs Sage Audio and has taken up rightful residency on Music Row in Nashville, literally steps away from RCA Studio B where Elvis recorded "It's Now or Never" and Roy Orbison laid down "Only the Lonely".

Below are Steve's suggestions for using reference headphones effectively.

Mastering Tips from a Pro

Noise can come in many of different forms, but the two most common are hiss and hum. Both of these can be heard more easily with headphones.

Hiss is usually a higher frequency noise spread over a large section of the frequency spectrum. In most cases hiss will start around 5 kHz and continue through 20 kHz.

Fix: Find the track or set of tracks where the hiss is coming from and use noise reduction hardware or software to reduce it; be aware that excessive noise reduction can sound unnatural. Only reduce as much noise as is needed, not to affect the primary recorded signal or tonal quality of the track.  If hiss is excessive and the primarily signal is below the frequencies that are affected, a low-pass filter can be used to remove high frequencies.  A good example where this may apply is removing hiss from a bass guitar track.

Hum is most commonly found in the lower frequencies.  In many cases hum is caused from improper grounding. If hum is audible and re-recording is not an option, the following technique can be used to greatly reduced or remove hum.

'Pumping' and 'Breathing' are commonly caused by the overuse of compression; however, in many cases these artifacts will be subtle or hidden in a mix until referenced through headphones. Most often they are caused from heavily compressing the lead vocal; however, compression artifacts can be from other tracks that are compressed.

Fix: Find the compressed track in question. Reduce the compression threshold and/or ratio. If this doesn't resolve the problem, experiment with a slower attack and/or release time. It's a good idea to create two or three different compressed versions of the mix and compare each with headphones until the compression artifacts are reduced or inaudible.

Headphones can reveal subtle details that may not be heard on all monitoring systems, especially when listening to the amount of effects used in a song, most notably reverb tails and delay/echo repeats.  After mastering, these effects can become more pronounced, so it's important to listen closely to the amount of effects that have been added to the mix.

Fix: Listen to a section of the mix that has less instrumentation, but still has effects applied.  If the effect used is reverb, listen closely to the amount of reverb and its decay time; do the settings compliment the song?  If not, adjust as needed. For delay/echo effects, listen to the timing between repeats and amount of repeats; do they match the song appropriately?  If either the reverb or delay/echo effects sound more pronounced than expected, or inappropriate for the song, most likely they will be even more pronounced after mastering.  Using headphones to adjusting reverb and delay/echo before mastering will ensure the effects sound most appropriate after mastering.

Overdriven hardware, or levels that are set too high in software can clip transients and cause distortion. This can happen during the recording or mixing process.  Using headphones, listen closely for distortion, especially during louder sections of a mix. In most cases it will not be heard as blatant distortion, but as a 'harsh' sound that may cause ear fatigue.

Fix: Find which track or tracks the distortion is coming from.  Check the input and output level of each piece of hardware or software that is in the track's signal chain. Confirm that no levels are set too high. Be aware that VU meters do not show peak levels, and some PPM's (Peak Program Meter) are known to be inaccurate.  If all levels are metering under clip detectors and a track is still in question, reduce the input and output of the track's corresponding equipment by 3dB. Check to see if this corrects the problem. If the distortion is still noticeable, then it's possible it was created during the recording process. If this is the case, an equalizer can be used to reduce the frequencies that are most affected by the distortion.  This can help hide the distortion; however, to remove it completely, the track would need to be re-recorded.

Pops or clicks are commonly caused from improper editing: for example, cutting an audio region without adding fades. They can also be caused from equipment adjustments during the recording process. Listening closely with headphones can reveal a subtle pop or click.

Fix: Listen closely to find if there are excessive low frequencies on any of the tracks. If so, use a high-pass filter to remove them.  Be sure to remove only the unwanted frequencies as each instrument or vocal contains harmonics. In many cases, lower harmonics can add power to the sound of a track.  To be sure important lower harmonics are not removed, apply a high-pass filter and then listen to the track for 30 seconds or more.  Next, remove the filter and listen again for another 30 seconds or more. This will help to find the appropriate amount of low frequencies to be filtered.

Headphones are helpful when creating fade-ins and fade-outs. It's common to use a fade-out to slowly reduce the level of the track until its end; in this case, headphones can help to ensure the music is inaudible before the fade-out ends. Another common use for a fade-in or fade-out is for hiding noise that was created during the recording process.

Fix:  Listen closely to the proposed fade-in and/or fade-out. Does the fade-out sound natural? If not, adjust the fade curve or fade length.  If hiding noise is a concern, adjust the fade curve and/or length until the noise is reduced or inaudible. A common fade curve to use is the logarithmic curve. This more closely matches the way our ear responds to sound level.

Headphones are an invaluable tool for picking out subtle imperfections.  There's no doubt they should play an important role in referencing a final mix. A quality pair of headphones, like Shure's SRH940, can assist in crafting a polished mix that's ready for mastering.

Got a tip for using reference headphones for mastering?  Share it by commenting below.


STEVE CORRAO is a mastering engineer in Nashville, Tennessee, who owns and operates Sage Audio. He has worked with a diverse array of artists, ranging from country singer Meghan Linsey of Steel Magnolia to blues guitarist Derek Trucks of the Allman Brothers. He received his formal education from Belmont University with a degree in Audio Engineering. He is technical in his work, blending classic and modern techniques together to create polished masters for each artist.