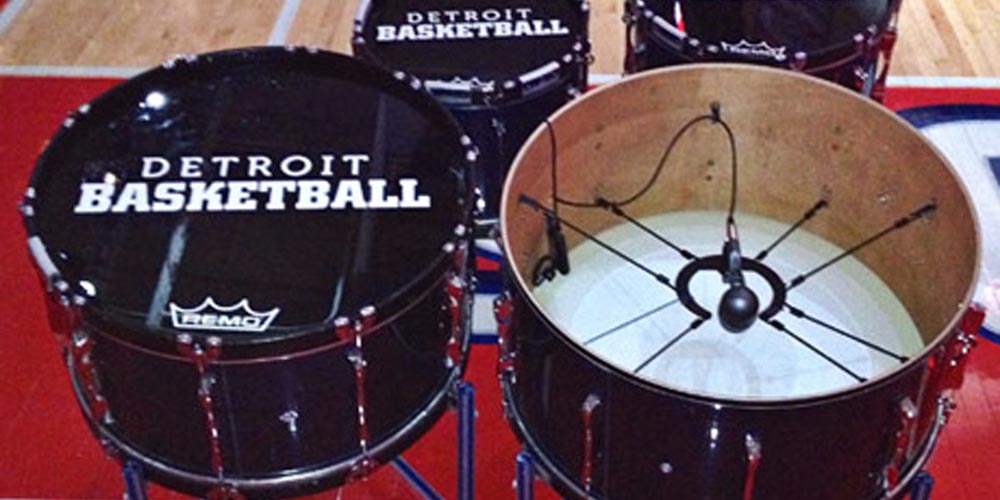 When most of us think of marching bands, making the drums louder isn't something that comes to mind right away.  But for Todd Ohme, the Director of the Pistons Drumline, it's been more like a calling.  Specifically, he wants to rock the house – and that house is The Palace of Auburn Hills, where The Detroit Pistons play to a crowd of over 20,000 fans.

Inside The Palace on Game Day[/caption]

Here's how it all started: Todd had been a percussionist throughout his school years and continued performing at Michigan State, where he was a member of their 35-member drumline.  Then he graduated with an engineering degree and reality set in.  Since he wasn't following a career as a professional musician and drums aren't traditionally a solo instrument (ask anyone who lives two doors away from a teenager learning to play them), there wasn't really an avenue for Todd to continue pursuing his passion for percussion.

Then Fate stepped in.  Turns out that just about that time (2005), The Detroit Pistons were looking to add a drumline.  With nothing to lose and everything to gain, Todd assembled a group of MSU drumline members.  The Detroit Pistons drumline, directed by Todd Ohme, debuted in the 2005-2006 basketball season.

A drumline, which may seem obvious to some but not all, is pure marching percussion.  The appeal, according to Todd, is that "drums are universal – there's no language barrier. It's entertainment that people of all ages can enjoy so it's just perfect for an arena like The Palace." Today's Pistons drumline, no longer limited to MSU musicians, has 24 percussionists, At each game, they use up to 8 snare drums, 5 marching tenor drums, 3 cymbals, and 4 marching bass drums (which are played horizontally on rolling stands, but more about that in a minute).

One can only imagine Todd's enthusiasm in building a drumline from scratch for a major NBA team.  He was on fire. "I really wanted to take it the next level – big energy and big movement.  We want to run out there, amp up the fans in a minute and thirty seconds, and then leave the crowd feeling that intensity." The Palace has an awesome sound and light rig to support The Pistons' demand for big, big halftime show productions (and don't forget, the venue is also a concert arena), so Todd and his drumline were all set to impress. They've come a long ways over the past 8 years, Todd says "In the beginning, we may have been a little too intense and scared a few children instead of entertaining them."

Connecting with fans is the mission. A great opportunity for this is the drumline's post-game performance, where fans can groove to the beat up close, as they're leaving The Palace.  Todd says, "We'll have crowds of over  400 people surround us – and they feel really connected to the experience being that close and seeing how big all of our movements really are."

The drumline occasionally uses audio backing tracks to keep their performances more diverse.  Everything from Motley Crue to Rush to Stevie Wonder, but Todd still wanted the drumline to have more of that bone-shaking rock and roll physical effect.

"In thinking about how to connect with the crowd, we looked at miking techniques. We've miked the drums right from the start using a few stand mics, mainly to help get the clarity of the sound spread more evenly throughout the arena. But I wanted to bring out the lower frequencies of bass drums and really dial in the sound. When you're listening to an audio engineer soundcheck a kick drum for instance - the engineer gets the levels right and turns the faders up. When you first hear it through the house system and your pant legs shake with every hit....that's really impressive." He knew the drumline could have that same intensity level.  "I wanted the fans to be blown away by the sound."

Todd set out to find a creative way to wirelessly mic the drumline's four bass drums.  And did.  "We got the Kelly Shu Bass Drum Microphone Shock Mount for our Beta 52As and it was an absolute no-brainer. The mic is suspended inside each drum so there's no fear of damaging it or having the mic pick up a hard bounce on the shell.   We're getting a great sound from inside the drum and it's given us a lot more gain before feedback, too.  Before this setup, a spectrum analysis of the drum, was showing a roll-off around 70Hz and some resonant peaks around 150 Hz.  Now, without any adjustment we're getting a much deeper/engulfing sound, and when we bump the EQ in the 40 to 50 Hz range you can hear the roof of the building shake! We have a Beta 52A in each of the four bass drums and we have them all dialed up so the fans can actually feel what they are seeing and hearing. It's ridiculous."

We had a lot of trouble in the past, but using a Beta 98 ad/c on the snare head and Beta 52As inside the bass drums has given us an edge.  We also EQ and compress the snare signal to make it fatter and as a whole, sound a lot more like a fat rock drumkit than a drumline."  Todd's a happy man.

The list of wireless equipment at The Palace is pretty lengthy. According to Todd, finding open frequencies was simplified, since the Shure ULXP4 receivers the drumline uses all have a frequency group/channel scan feature.  With the dozens of wireless systems in use on game day, that's impressive. "We haven't had a drop-out or problem with frequency interference and the receivers are located up in the control room, about 300' from the drums."

One of the few drumline majordomos who continues to perform with the group, Todd Ohme doesn't really sound ready to lay down his drumsticks or stop thinking of ways to turn the group's minute-and-a-half sets into a Springsteen moment.  He's looking to connect with the fans and deliver that palpable excitement.  "If the crowd can see it, hear it and feel it, then you've got it all and that's what it's all about."

So you're not in a drumline?  The mounting system is perfect for gigging musicians, too!