Photay is the Layer Player 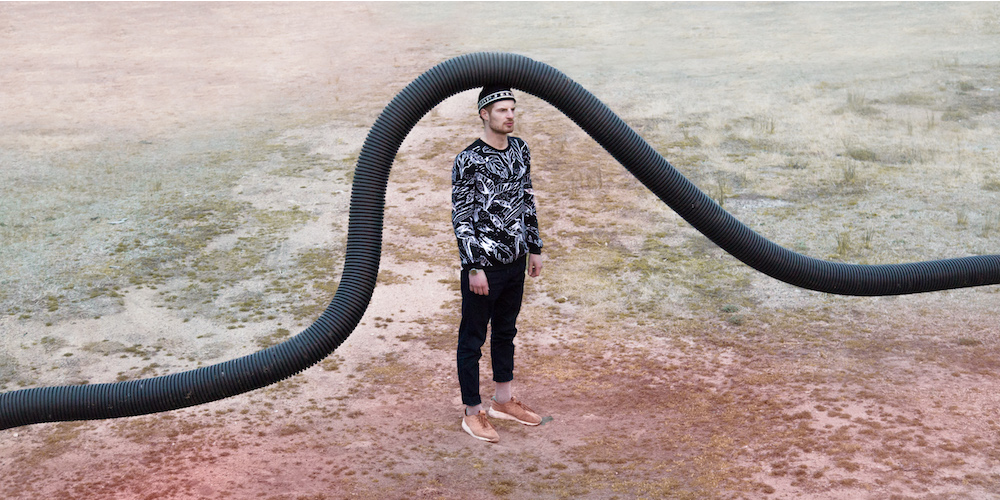 PHOTAY layers samples, field recordings and instruments both acoustic and electric to create a cinematic experience for the ears. But playing his songs live can be a challenge. This interview appeared in the LOUDER Music Makers print edition.

Evan Shornstein, aka Photay, is a producer based in Brooklyn, New York. His debut full-length, Onism (Astro Nautico) was released in August 2017 to critical acclaim and he has performed in support of Odesza and Bonobo.

Your latest album has layered instruments – how do you decide what to play live?

Photay: I think it’s a very tortuous process always from what I’ve dealt with so far, because I’m really passionate about having a live set that is not just the album, you know? Something that’s just completely reworked but familiar. And it’s been sort of a learning process from the first iteration of the set. Over time, I started to see the priority of what works live and what is overlooked. So, it’s having this combination of playing the most important and noticeable elements and then having live samples that are being looped in the background.

Can you give an example of an element you’ll play live and one that you’ll loop in the background?

In introducing the Korg Minilogue, I’ve played a lot of chord progressions out. It feels really good to just jump on the keys for a second. If I was playing with a live band, of course, I’d love to have everyone play each individual element. But basslines, certain drums, I think a lot of the time with drums I’ll have light percussion layers that are looped and then I’ll be physically playing the kicks or the snares. But I try to change it for each song, so it’s not just like here are backing tracks that I’m playing synth over, because that would drive me crazy. Each song I focus on a different element.

Playing kicks and snare live sounds unusual – are you playing it for a bit and then looping, or playing throughout the song?

For instance, in my song “The Every-day Push,” I’m playing the big 808 kicks, the sort of spring delay percussion and the claps. I’ll be doing that pretty much throughout the song and I’ll just sort of reorganize the song or rework it so there’s big breaks in the middle where I can hop off the drums and jump onto synth or something. So usually I’m playing it throughout, but I leave enough kind of looping supporting percussion, so I can hop off of it. If I were playing with other players I could really sit there and play it, but I want to have the flexibility to jump around. I usually have one hand on the [APC40] and one on the [drum pad].

Speaking of spring sounds, there are some beautiful ones on Onism– lots of short, tonal tails of delay. Is there a specific way that you made those – a particular device you use?

On the last record, I was given a spring tank from a guitar amp by a friend. I had these samples that became my crashes instead of cymbals and just running a lot of different sounds through it, or kind of plucking the springs. I was also heavy on the Max for Live Convolution Reverb, so a lot of those have just been my favorite reverbs, my go-to for things. So, this album actually, it was still a lot of simpler delays out of Live.

Erm, both! I always feel really good about, just like having a naturally occurring sound, something super organic. Not even like something that you recorded in the studio, just something out in the world, existing in its pure environment. And that definitely informs the track, even if it’s just a second-long click. I just like the idea of taking something from a very organic source and then pushing it way into digital territory. A lot of the time too, it’s like working on a track and there’s just a lot of digital silence that I can feel. A couple of the tunes, like “The Everyday Push,” there’s a really light layer of field recordings. For example, birds at Big Sur on the [US] West Coast, just off the side of the road. They’re really subtle, but in headphones especially there’s a light layer of an organic landscape.

That’s an interesting solution, rather than using sampled tape hiss or vinyl crackle.

Right! Early on, I was throwing a vinyl crackle over everything. And then once this music actually gets pressed to wax... it’s kind of meta. And for me it’s just a nice way of sneaking in some kind of moment in there that people might not realize unless you bring it up.

Do you usually start working on a track with a chord progression, a particular sound or perhaps the quality of a loop?

Most consistently it’s a certain sound with a certain quality. Like there’s the tune “Storm” on Onismwhich was a jam I had with my voice, a harmony pedal, and a cathedral reverb pedal.  And I just spliced up the jam that I had and made a progression out of it. In other instances, I’ve just come across a chord progression that I love, and I’m just inspired by that solely. But it usually comes from a very specific timbre, that’s just like, “I’ve just found this world that I like within that and I feel I can build off of it.”

Your degree is in studio composition. Does that influence your approach to making a track?

Yeah. I had a few professors who were really pushing me into writing songs, so sitting down at the piano and just writing. There’s something I’ve definitely taken from [my degree], kept an emphasis on melody, development and whatnot. I agree with that, but I’ve also gotten pretty deep into techno and I’ve always been into IDM and all these different genres that are timbre-based.

Are you able to be creative at a set time, or do you have to wait until inspiration strikes?

I’ve been experimenting a lot with that. I remember when I first moved to the city, I was thinking, “OK, it’s time to treat this like a job, get up, have breakfast and sit down and let’s do it!” And I would just be sitting there, me and a wall, with this feeling of, “Oh man...” Nowadays, I’ve been doing a lot of stuff, like I go swimming first thing in the morning a lot and that really helps. But yeah, [creativity] definitely comes in waves. I go through long periods where I’m just working on timbres and sounds and then something happens where I just get stuck with this really clear vision of arranging and writing.

Where do you see things progressing next with your music?

I’ve gotten a lot of new instruments, like the Buchla Easel, and I’m doing a lot of touring. A big goal is to just really keep moving forward and avoid repeating myself. I have a lot of goals set to really work in some new environments and keep experimenting with new workflows. Whenever the question is asked: “What is your typical workflow?” I still feel like I’m figuring it out.

A version of this interview originally appeared on the Ableton site here.