Mysteries and Treasures in the Shure Archives 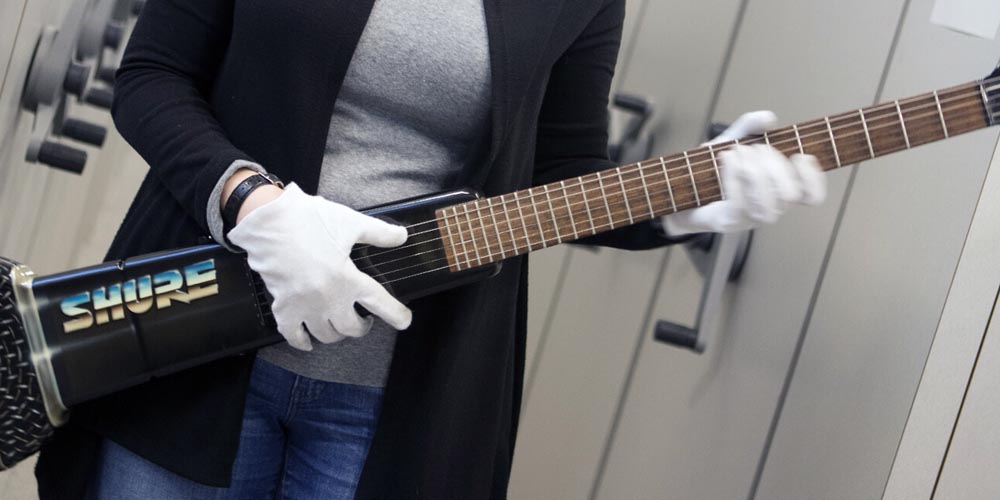 Up a steel staircase, past a sea of engineers' workstations, above the loading dock, down the hall from the quality lab, and in between the tool and model shops lives the fascinating Shure Archives. To the lover of all things audio, it rivals the National Archives for riches. But unlike that venerable institution, its pass-protected security door opens only to a few.

There are rows of floor-to-ceiling shelves flanking a narrow aisle: 12 rows of documents on one side, 10 rows of artifacts on the other. Pass those, and enter an even more restricted area with objects yet to be cataloged. The area likely contains a combination of priceless objects and pure junk. Only a few Associates at Shure headquarters have 24/7 security access to this area.

The archivist of all these things is Julie Snyder. She's also the Shure librarian. Here, surrounded by the whirring of machines, the sound of forklifts, and the whine of the drill press (sometimes punctuated by a cheerful, "Sorry, Julie!" from next door), the environment is different from the corporate, public and university libraries where she has worked before.

Julie joined Shure as a librarian in 2008. Meanwhile, the company had hired professional archivists to catalog the Shure Archives, essentially the contents of a big closet that contained items dating back to the founding of the Shure Radio Company in 1925.

A year later, Julie was handed a challenge: take on the additional role of archivist. That's not her background, so she was hesitant at first. "The consultants who were hired to organize the Archives did a fantastic job of putting a system in place and organizing things," she said, "so I was very lucky to have inherited something that had the order already established."

Not a Lending Library

The 4,000 objects in the collection and 1,300 linear feet of documents enter Julie's lair in several ways. First, there's the annual office cleanup, where things like a punch-out guitar pick from Winter NAMM 2012 find their way out of desk drawers and into unmarked cartons. Then, there are the survivors, including a still-functioning UHF-R® receiver that survived an encounter with a forklift. (Would Shure take a trade-in? Yes.) On rare occasions, Shure purchases at auction a coveted item missing from the collection.

But here's the thing: except for the items in the downstairs lobby display cases, archival items almost never leave the building, or even this space. Loans from the Archives rarely happen. The company prefers to keep archival items within the safety of the Archives' walls.

On that note, there are boxes of fresh white cotton gloves, and nitrile ones for cleaning, in abundance. Nothing, not even a yellowing sheet of paper with notes from a 1983 marketing meeting, is handled without them.

Archivists have a respect and even a love for the objects in their care. So, asking Julie to pick just a few examples of artifacts that typify the collection was like asking a parent to identify a favorite child. In a little over an hour on a busy day, we looked at some things that ran the gamut from the curious to the colossal.

708A Rocket Dynamic Crystal Microphone
Circa 1940

"These two products, the Zephyr Tonearm and the Rocket Mic, are clearly architecturally inspired, using not only one of the dominant design themes but also the materials of that era," Julie explained. "Bakelite was popular in radio casings when the Zephyr Tonearm was manufactured because it was lightweight, heat-resistant, and flexible. Metal was saved for war production efforts."

"Here's another of my favorite mics," Julie smiled. "It came in a variety of colors, including military green, white and silver. We made them for tape recorder manufacturers like General Electric and Bell + Howell. We sold them to our own customers as public address mics."

"The box that these were found in really was labeled that way. Some of these are ours, and some aren't. One is an Ellis microphone. Shure shared building space with Ellis and helped them with distribution. Another of these has a 'rebuilt and reconditioned by Shure Brothers' label on it," Julie said, indicating the label. "That's how I discovered that we repaired other companies' mics in the early days."

"Here's one that's still a mystery," Julie said. "It looks like an RCA ribbon microphone, but it has a Shure logo on it. I haven't found it in any of the old catalogs. The corrugated ribbon that you can see in the center has been replaced in current Shure ribbon microphones with a material called Roswellite®."

"This was a gift from Hamer Guitars to show their love for the SM58. They paid so much attention to detail that they made sure to include the XLR connector for the cable in the back. And look at the logo," she said, pointing to it. "Nothing says the 1980s like an airbrushed logo. The guitar is playable, and there's a video of a Shure Associate playing "Sweet Home Chicago" on it."

"This awesome door is probably thicker than a meat locker door and was the entrance to the Shure anechoic chamber in the old Evanston location," Julie explained. "Since the SM57 and SM58 were tested in that chamber, we thought it was important enough to bring the door with us when we moved to Niles."

After the tour, Julie returned the objects to the fancy Hollinger archival storage boxes on her meticulously maintained shelves.

Julie obviously relishes the element of surprise and the promise of research in her archivist responsibilities. "I never know what people are going to hand me," she said. She also appreciates her not-so-small corner of Shure headquarters, even if the trek to the Archives is long and winding. "I'm not in a leaky basement or a hot attic where many archives are located. One of my colleagues worked at an aquarium where the library was located under the dolphin enclosure. Dolphin water ended up leaking on the collection. That doesn't happen here."