Live Podcasting: Trading Your Bedroom for the Stage 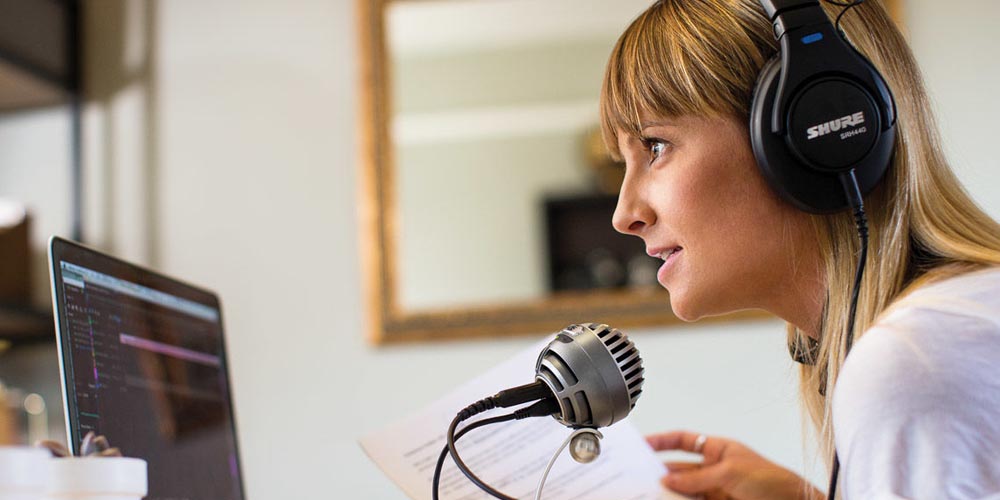 Joel Dullroy doesn’t podcast for fame or fortune – he does it because he loves Berlin, the city where he lives. His motivation, however, has certainly changed since he started podcasting in front of a live audience.

“When you’re doing a podcast it can feel quite lonely. You’re often just talking out into space and there’s no feedback at all,” said Dullroy, who was calm but undeniably feeling some pre-show tension 30 minutes before his live podcast was set to begin.

Having an audience in front of you brings it to life. You see their reactions instantly. People smiling, laughing, clapping. It’s a lot more rewarding than just doing a podcast in your bedroom.

Yes, once the domain of bedroom and basement broadcasters, podcasting isn’t just for shut-ins anymore. A growing number of podcasters are taking their shows live in the search for new ways to interact with their fans and promote what they do.

Dullroy, a wiry 34-year-old Australian, made his way to the German capital eight years ago after a stint as a journalist on a now defunct newspaper. Looking for a way to be more tapped into what was going on in his adopted home, he eventually started the popular English-language podcast called Radio Spätkauf with a few friends.

“Normally there’s a radio show or local newspaper to get that really basic information about politics and city developments,” he said. “But as a foreigner living in a city, there’s a bit of distance there that I wanted to close. So we got together and started regularly discussing what was in the news.”

Eventually, they started recording their conversations, thinking other people might be interested in the same topics. And Radio Spätkauf was born.

The podcast was named after Berlin’s ubiquitous corner shops that are open late at night. A Spätkauf is a place to grab a beer and a snack – and maybe even shoot the breeze a bit. (Think New York City’s Korean bodegas but with fold-up benches and tables out front and cheap half-liter bottles of beer for sale.)

The rest, as they say, is history. Now in its fifth year, Radio Spätkauf has developed a devoted following among Berlin’s expat community. It has even attracted the notice of a prominent local public radio station, which recently commissioned a shortened version of the podcast to explain city happenings to the German capital’s growing number of English-speaking residents.

Yet as gratifying as all that is, Dullroy and his collaborators wanted more. So they eventually came up with the idea of doing a podcasting show in front of a live audience.

We decided to switch to a live format where we record on stage in front of an audience once a month. The dynamic is different, it became unexpectedly entertainment. Originally it was news, which isn’t necessarily funny.

“We decided to switch to a live format where we record on stage in front of an audience once a month. The dynamic is different,” explained Dullroy. “It became unexpectedly entertainment. Originally it was news, which isn’t necessarily funny.”

To celebrate the podcast’s fifth anniversary, the Radio Spätkauf team took to the stage of an alternative comedy club on a dark side street in Berlin’s hip and gritty Neukölln district. With craft beer on tap and an international crowd before them, the multinational quartet (comprised of an Australian, a Brit, an American and a token German) kept to their hyper focus on local issues. They analyzed the incoming city government’s plans for public transportation and warned that a swan had tested positive for the deadly bird flu virus at a nearby canal.

Highlighting the difference approach a live podcast requires, they also debuted a new set of snappy, custom-made jingles to accompany the segues between segments. “I spent 99 cents on an app. I’ve got it all under control,” said Daniel Stern, Radio Spätkauf’s resident stand-up comedian, in an attempt to placate Dullroy’s pre-show nerves.

The jingles did, in fact, go off without a hitch and the live podcast ended up being fun and freewheeling affair. The evening even prompted one of the show’s guests to say the experience was nothing like when he recorded his own podcast at home. Konrad Werner, a long-time columnist for the city’s biggest English-language monthly magazine Exberliner, clearly enjoyed the limelight – even if it did mean there was a dress code to adhere to.

“Normally it’s just me in my bedroom with no trousers on,” he said on stage to the laughing crowd.