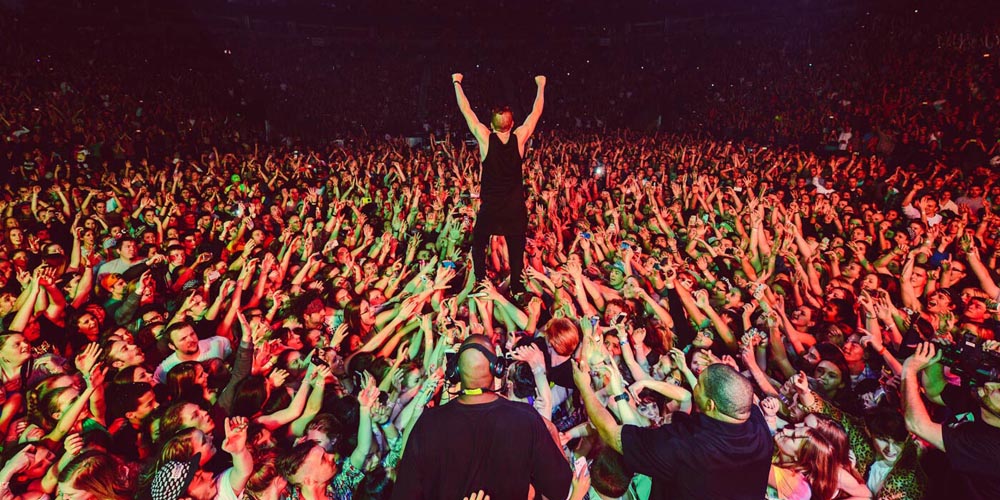 For my third post in the Industry Insights series, I thought it'd be cool to chat with Chicago-based photographer Zoe Rain about how she got her start in photography, her experiences shooting on Macklemore & Ryan Lewis' tour, and what it takes to make it in the business.

BROOKE GIDDENS: When did you know you wanted to be a photographer?

ZOE RAIN: I have had an interest in photography for as long as I can remember, although I can't say I was a natural. I never really considered it to be a lucrative or viable career choice, so I mostly shot for fun.

BG: Did you have formal training, or did you teach yourself?

ZR: I was failing my high school photography class (ironic, I know) when I met my mentor, Jason Koenig, who shoots as JKoe Photography. He came to volunteer one day a week and helped me bring my grades up, as well as spur my desire and inspiration to pursue photography as a career. From there I shadowed him in everything he did, from shooting to lighting, posing and working with people, and editing on the back end.

I also did one year at Seattle Central Community College's Commercial Photography program. Don't let the name fool you; it is one of the best in the country with the nicest public college facility you can find. I learned technical artistry there— shaping light, working in a studio setting, collaborating with designers—as well as basic video and audio recording.

It's been a combination of practice, being in the right place at the right time, and pushing myself to shoot work that I wasn't necessarily ready for yet. Now, I have been full-time freelance for several years.

BG: You toured with Macklemore & Ryan Lewis. Was this your first time on tour with an artist? What was that like?

ZR: That was my first tour, yes. It was pretty surreal. I had only been to Europe once before. On their tour, I got to be in Europe for an entire month and see dozens of different cities and giant arenas. I blogged about the entire experience. It was the least sleep and the most amount of work I have ever had to commit to something, but it was extremely rewarding.

I never really recovered from jetlag since we drove from time zone to time zone. Often I stayed up till 6 AM to edit images from the night before, then slept a little before waking up and beginning to shoot again. I truly never was able to unwind aside from when I was in my bunk. I had my camera permanently at my hip, even when having a drink or hanging out after the show. Those moments when everyone else relaxes tended to be the most magical.

BG: What lessons did you take away from your first tour experience?

ZR: I learned how far I could push myself, both physically and mentally. It is draining and often extremely isolating to be a tour photographer. I spend a majority of my time editing alone in the darkness, and when I am shooting, my job is to be a fly on the wall and be completely ignored. Plus, going from one dark stadium basement to the next gets to you. The day-to-day isn't as glamorous as people envision.

I also learned a lot about people's fascination with and treatment of celebrities.

Being so exposed to Ben's journey was eye opening. I got to experience a little bit of what it is like to feel the rush of 30,000 people filling an arena, then being whisked off to a completely silent empty room. It is a lonely life, where people are only interested in what they can get from you in the moment. I have seen him interrupted hundreds of times in daily life by people who simply grab him for a selfie and then walk away as though he were merely a prop in their lives.

Since tour I have gained respect for celebrities—for their privacy, and for the fact that they have to deal with a press that's out to get views and make money. Plus, 90% of celebrity rumors and controversy is either completely untrue or a misunderstanding. People are so quick to judge based on some article or tabloid. It's important to realize that every human and artist is just trying to live their life and create something that is meaningful to them.

BG: Have you worked with other artists?

ZR: I have had the pleasure of working with some incredible artists. While out with Macklemore, I got an extra bunk on a 1970s double-decker tour bus for Chance the Rapper, who had just finished opening for Eminem's tour. At the time I had no clue who he was, nor was I too thrilled about getting thrown onto the oldest bus in the tour caravan. This led to me shooting my first magazine cover of him for STATUS Magazine.

Moving to Chicago after that was such an insane happenstance because he is such a gigantic public figure in this city, both in the hip hop scene and the movement to end gun violence and create a safer environment for youth.

I also got to shoot Sam Smith a few times, worked alongside my mentor Jason Koenig on a couple Ed Sheeran concerts, and shot Lorde backstage in her dressing room at the GRAMMY® nominations. I also got flown out to Electric Zoo in New York to shoot the Swedish electronic music duo Galantis. Aside from those names, I loved working with smaller local artists in Seattle (some of whom are now starting to get some recognition), including Mary Lambert, writer on the hook in "Same Love," from Capitol Records; The Flavr Blue, who are touring some festivals on the West Coast; La Luz with Hardly Art Records, Grieves, Thunderpussy, and more.

BG: What advice would you give someone pursuing tour photography or music photography?

ZR: Shoot small bands! Learn how to shoot in crappily lit basement venues, because once you can do that, you can shoot anywhere. Be in the right crowd, and shoot a lot for free when you are first starting out. Sorry, kids, but most music photographers don't make any money. I shot hundreds of small local shows for free, just so I could have something to send the artist, make a connection, and get my name out there.

My situation is super-unique, so I feel like I can't give the best advice on this. Even having had such an incredible experience, I still struggle greatly to get any jobs related to music.

BG: What's the best advice you've been given?

ZR: Be so good they can't ignore you.

BG: What's your favorite story from your experiences as a tour photographer?

ZR: Besides waking up and walking straight into Miley Cyrus soundchecking for the Jingle Bell Bash at the Staples Center in LA (I am obsessed with her), I think the coolest moment for me was shooting a photo story for Rolling Stone on Macklemore's journey to the GRAMMYs.

Sitting in the car bumping rap music driving to that award event was insane. I was sitting there thinking, This is iconic. You are experiencing a life moment here. This guy is about to clean out this entire show. And whether you like Macklemore or hate him and completely disagree with how the awards were given out that day, I don't really care. The point was that, at that moment, due to some strange string of events, a lot of hard work, and a little elbow grease to convince Rolling Stone to hire me, I was within a car seat of greatness. I was living my dream, and documenting someone else doing the same.

The GRAMMYs were also insane because I sneaked backstage. I did not have a pass, and I had no idea how I was gonna get in, but I managed to sneak into dress rehearsal and then the show the next day. I stood two feet away from Beyoncé and Jay-Z, shot creepy iPhone photos of Katy Perry, and even walked by Paul McCartney. So that was pretty surreal.

When you put your mind to something, great things will happen.

View more of Zoe's photography and learn more about her on her website, zoerainphoto.com