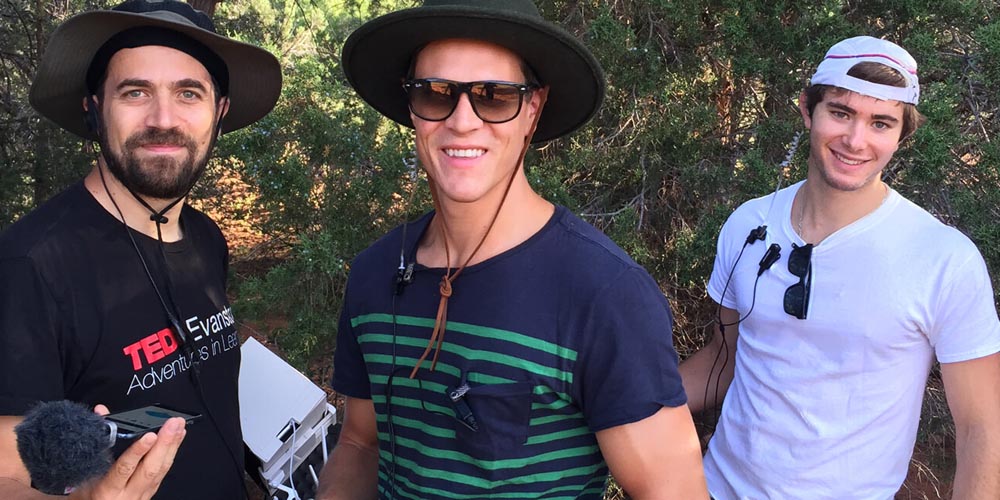 It all started in 2015 when documentary filmmaker Daniel Zox found himself in a gathering crowd of amazed content creators as Shure Product Manager Thomas Banks demonstrated the MOTIV™ MV88 iOS Digital Stereo Condenser Microphone at The NAB Show™ in Las Vegas. Three months later, the MV88 earned a starring role in a launch video for the Hammerhead One, a cycling navigation device that took the mic from Alphabet City in the East Village to the slick rock cycling trails of Sedona.

It was a year later when we caught up with Zox, a Chicago native. By then, the product design firm R/GA and start-up Hammerhead had picked up five Cannes Lion Awards, and Daniel was knee-deep in scripting and shooting two full-length documentaries.

Davida Rochman: How did you get involved in this project?

Daniel Zox: My brother sent me an email about the Hammerhead HH1 navigation device, and I thought it solved a real problem for cyclists. I'd wanted to work on something involving sports-related gear for a long while, so I cold-called Hammerhead's office in New York. The Hammerhead One wasn't ready just yet, but when I called back a couple months later, they were interested in making a video. That led to a meeting at their offices.

Several members of the team are athletes. Piet Morgan, the CEO, was a Yale rower. He grew up in South Africa and cycled with his friend Chris Froome, who won the 2013 Tour de France. His brother Jon is VP of business development and has a similar background. Laurence Wattrus, head of hardware, rode mountain bikes competitively. It turned out that their combined athletic skills were very useful in the shoot.

DR: What was your role?

DZ: Hammerhead already had some ideas about the aesthetics of the video.

I collaborated with their team on developing a treatment. Then I produced, directed and shot the video. Working with an early-stage startup, we decided to use the Hammerhead team as crew, voiceover and talent.

DR: You saw the MOTIV MV88 at NAB. What made you decide to use it for the Hammerhead project?

DZ: I knew I was going to need a portable high-quality audio solution that could be operated by one of my non-professional crewmembers. It would have been great to have a professional sound recordist, but it just wasn't in the cards. The conditions were going to be challenging—harsh environments, wind and dust—but it's essential for me to capture the best audio possible to make my movies work. The MV88 looked like a promising solution.

DR: The MV88 is intuitive enough to walk the line between consumers and pros. Even so, you had a new client, a new project and some unknown variables. What kind of testing did you do before you headed out on the first day of shooting?

DZ: I had a chance to practice with it before production began. Wind noise was going to be an issue, so I called Thomas Banks for some advice, and he sent me a Rycote® Windjammer® that's specifically made for the MV88. The build quality, among other specs, of the MV88 is definitely professional, but when I received this furry little wind muff, it reinforced my appreciation of how much Shure cares about getting good sound, which is cool.

Before I left for the shoot, I consulted with Dan Agosto, a talented Chicago-based musician, composer and sound mixer I've worked with on many projects. I brought the MV88, my iPhone 5c, a Matthews Minigrip Kit and my bike. I knew the sounds of the chain ring and chain moving through the gears were going to be essential elements in the soundtrack, so I wanted to find out if it was possible to capture those sounds with minimal wind noise while someone was actually cycling.

Dan suggested a good gain level and the Raw Mid-Side polar pattern so we could play with the stereo image in post. I also used the MV88's wind noise reduction option and the Windjammer. Between the software and the Windjammer, the ability to cut the noise was very impressive, but at the end of our test, I still couldn't get the clean sound I wanted. I realized that it was going to be a Foley situation and that I'd have to grab the chain ring audio in a different way. Testing saved a lot of time and potential frustration.

DR: Based on your experience, what applications do you think the MV88 has for other projects?

DZ: If you're moving quickly and you're doing a documentary or short interviews, set the DSP mode and polar pattern and press RECORD. You've got hours and hours of clean material at 48 kHz and 24-bit that's organized, labeled and easily transferred for editing.

DR: It's a really beautiful video, and the quality of the audio speaks for itself. Any other impressions you'd like to share with budding filmmakers or videographers?

DZ: Thanks. I was impressed by how sturdy the MV88 was on the iPhone Lightning® connector. Being able to record in 24bit/48khz WAVS or AIFFS is important for high-quality sound. Much of the work I do gets put online, so the video and audio are really compressed. Being able to record audio that is uncompressed really matters.

Below is the final product, plus the settings Daniel used for different locations and sounds, and his commentary.

In the "studio" – Chain ring sound

"As much as possible, I wanted to record the same bikes that we were using on camera, so after shooting Maggie (who worked at R/GA) in Manhattan and Brooklyn, Laurence and I brought her bike back to Hammerhead's office and flipped it upside down. I took the MV88, sort of snuggled up next to the bike under a blanket to minimize room echo and played around with the positioning and pickup patterns to get the chain ring sound we wanted. Laurence moved the pedals at different speeds so we could have multiple sound options. Having such a small mic with the ability to easily change polar patterns made experimentation possible."

"We looked for intersections and sections of streets where there were fewer cars and limited construction. In post, Dan used a plug-in in the Sonar audio program to decode the Raw Mid-Side signal. He adjusted the stereo image according to what was needed for the shot. It was eye opening for me to be able to have a professional option like that from such an economical recording device."

"Stephen, our volunteer recordist, hid in the bushes and along trails to capture those moments when our mountain biker Laurence was rolling by or climbing. You can vividly hear the sound of the wheels crunching on those red rocks. A boom wasn't necessary because he could narrow the width of the pickup area and be close enough to get exactly what we needed. The ability to record in Raw Mid-Side or Stereo was great because you can actually hear the cyclist go from left to right.

Early in the shoot, we used a Rycote shotgun mount to hold the iPhone with the MV88 attached, but later on, when Stephen was recording in Arizona, he just held it steady in his hand. The MV88 is isolated enough from the iPhone to prevent handling noise."

"I felt comfortable having a non-professional doing the sound recording because the MV88 is so easy to use. After testing and experimenting with the MV88 before the shoot, I knew I could teach someone quickly. If we were using a more complicated field mixer, I wouldn't have asked Stephen to record. Once a sound was recorded, Stephen named the file, and it was automatically stored on the iPhone. This ability to keep the sound files well organized was another great benefit of using the MV88, especially when we were moving quickly on the shoot. The MV88's ShurePlus™ MOTIV Mobile Recording App made it doable."

NYC and Flagstaff – Capturing the sound of voices

"Hearing the cyclist's breathing was important in communicating the effort of the rider, so Stephen recorded Ben right after shooting the climbing scene. The MV88's simple file labeling software made it easy to store and access Ben's multiple takes.

You can hear Maggie say,"Wow!" as she pedals over the Brooklyn Bridge. We recorded those in an apartment building courtyard and inside a quiet lobby to have options in post."