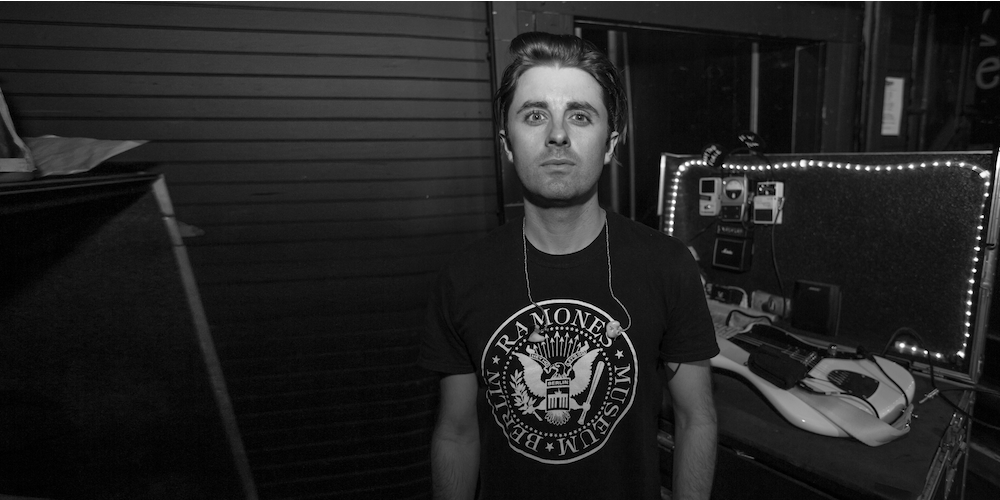 The job of a guitar tech is often misunderstood and underappreciated. Yet without them, there could be no rock. LOUDER caught up with the pro technician TYLER HERTZSKE while on tour with the band PIERCE THE VEIL to ask him what life on the road is really like.

LOUDER: How long have you been a guitar tech?

TYLER HERTZSKE: I’ve been a guitar tech for around six years.

How did you get started?

It was all an accident really. At about 17, a friend of mine had a short run of shows opening up for Social Distortion. He knew I played guitar and was always up for a good time, so he asked if I’d tag along and look after the stage during their set. Social Distortion being my favorite band growing up, how could I turn it down? Pulling up I was completely ignorant living in la-la land about the whole situation. Thinking “sex drugs and rock ’n’ roll.” I quickly learned how much actually went into the production of a live show... blood sweat and tears. Entering Marquee theater in Tempe, Arizona I look to stage right and see Mike Ness’ guitar vault filled with Les Paul’s and Mike’s tech at the time Donny was doing a set up on one of the “Goldtops.” Watching that guy doing what he did, made it look like he was working on a hot rod and I fell in love.

Who are you currently on tour with and what’s the biggest challenge on this tour?

Currently I am out with a band called Pierce the Veil from San Diego, California. Great band, awesome dudes!

How long have you been with the band?

What are you responsible for when it comes to PTV’s shows?

Building and maintaining Tony Perry’s rig and guitars and fixing anything that needs to be fixed.

How many guitars does each guitar player carry?

What wireless system are you using for his guitars and why?

The Shure ULX-D has not only clarified and kept the tonal qualities as true as it gets, but it’s also given me time back. It’s so easy and quick to use! I rarely have to re-scan and when I do, it just takes a few seconds and you’re good to go.

You’re constantly throwing guitars in the air, switching them out...did it take you awhile to master this art? Have you ever dropped one?

I don’t think you can master this. I’ve dropped a few in my time. In Amsterdam the bass body split completely in half on a drop and in Vegas one time on a catch the headstock caught me in the chin. I have the scar to prove it! The man behind the bass is not only a beast of a player, he’s also got a monster kind of arm with some terrifying throws... so yeah it’s fun.

What are some of your favorite pieces of gear?

What’s the most stressful trouble shooting experience you’ve had mid-show?

One of the most stressful situations I’ve been in was a Super Bowl pre-show at Madison Square Garden. We were direct support for Red Hot Chili Peppers. It was the last song of our set and the guitar cuts out. I ran to the pedalboard and saw we lost power. It was the last song, so I ran my player direct and just changed between amp channels for him on the fly. The set finished strong and I don’t think anyone noticed, but it was super stressful.

How does your job change in a festival environment as opposed to a venue tour?

Festivals can be stressful at times. It can be tough to sort changeovers and sometimes there can be too many cooks in the kitchen. From a wireless standpoint there are a lot more frequencies taken up, so scanning is much more crucial.