Many guitarists love to play but hate to practice. British blues musician MARY SPENDER offers advice on how to make practicing part of your regular routine.

Many guitarists love to play but hate to practice. British blues musician MARY SPENDER offers advice on how to make practicing part of your regular routine.

I’ve always had a love-hate relationship with practicing, and I know I’m not alone. The worst thing is the realization that there isn’t a way around it. None of your favorite virtuosic players (of any instrument) got to where they are by sheer luck and talent alone. They worked. Hard. In fact, they probably spent 10,000 hours learning their instruments and then probably another 10,000 hours practicing with them.

Creating pockets of time in your already busy day to focus on improving your guitar playing can be daunting. But forming regular habits is the key. So I’ve put together a list that should help you endure – and maybe even ultimately enjoy – practice time. 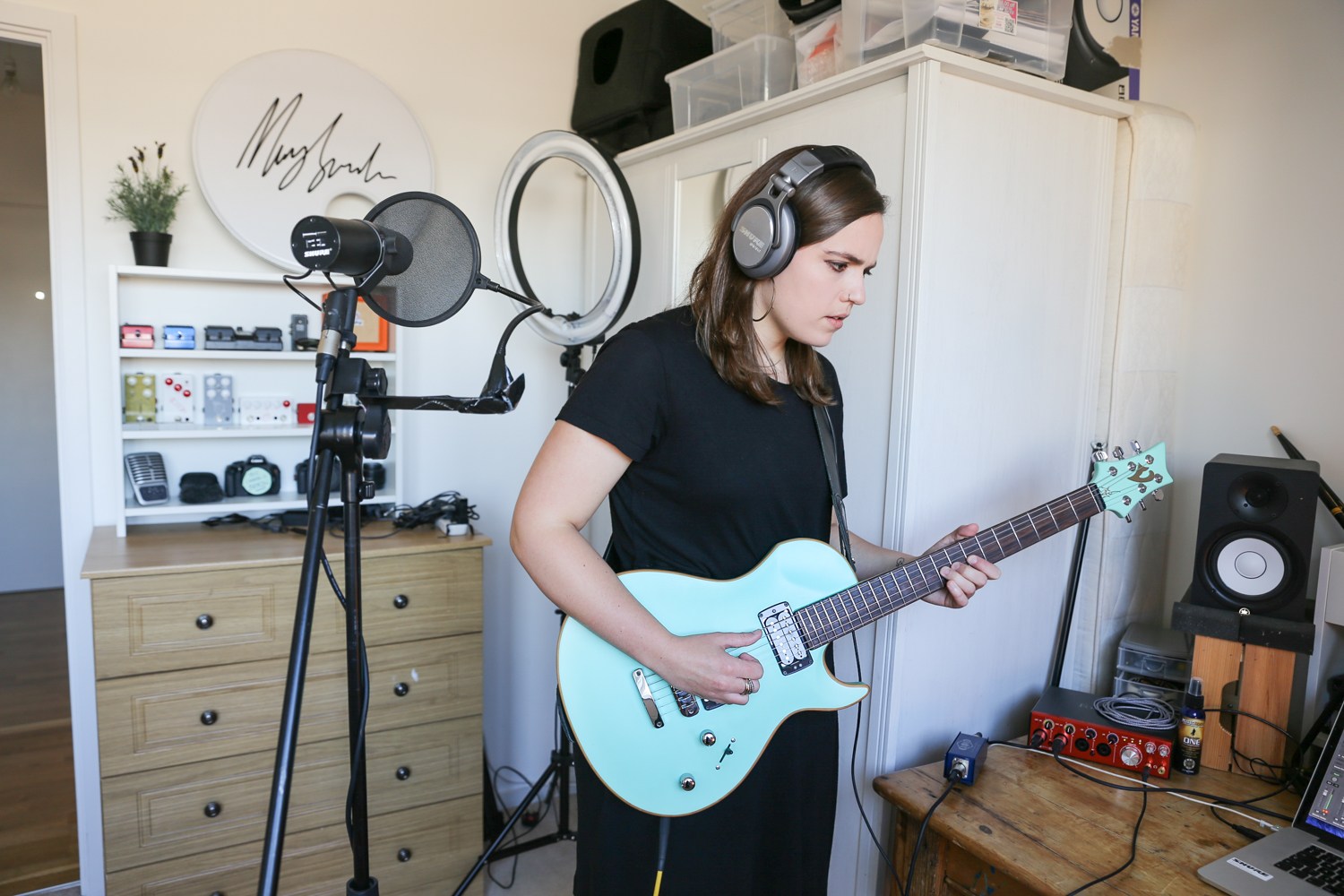 TOOLS YOU CAN USE

I have annoyed so many flatmates over the years with my guitar playing, let alone my family when I was an angsty teenager wanting to be the female Matt Bellamy from Muse. If you can’t find a quiet space or time of day that avoids your next-door neighbors being at home, then simply buy a pair of headphones. I know it’s not the same as cranking up your amp nice and loud, but practice doesn’t have to sound pretty. You need repetition and volition to nail that shred and it takes hard work. So put those headphones on and be respectful. I know this is a little harder to do if you’re an acoustic guitarist, but it generally is a little easier on the ears than distorted shredding.

In comparison to when I started learning the guitar, the internet is now full of high-quality online tutorials on YouTube and dedicated music websites. Find the song you want to learn, maybe with an accompanying TAB and watch, replicate and repeat.

Get a loop pedal

When I first saw KT Tunstall loop her guitar on Jools Holland my jaw dropped. She had mastered the art of concise and rhythmic layering, however, you don’t have to save loop pedals for live performances. They are a great tool for improvisation practice; record a chord sequence and riff over the top. When you do decide to take it to your next gig, be careful. Don’t set up a loop when you’re playing with other musicians, it’ll throw you off and it’ll be out of sync. Don’t create a loop longer than 4 bars, they can get self-indulgent and boring to the audience incredibly quickly. Keep it simple: This also goes for the actual pedal. I have the original Boss RC-20XL and although it has a slight delay on the playback button (something that took me a few embarrassing moments to master), it is easy to record over and even easier to stop. Go small for your first loop pedal and avoid the huge Ed Sheeran-esque stations. They’re a pain to carry around, too.

DARE TO BE HEARD

From the age of 15 to 22 I averaged one open mic a week. They can be time consuming, but the challenge of converting an unassuming audience into avid fans is a skill you need to practice. You also have nothing to lose. The art of walking up and performing something that you’ve only played in your bedroom can be a tough and nerve-wracking experience, but I bet you will walk off and want to do it again and again. Know things will go wrong. You’ll have sweaty palms, realize you have to introduce yourself having never spoken into a microphone. You might pull out your lead before the line is muted and give the audience a fright, but eventually you’ll learn to love the butterflies and adrenaline rush post gig, all knowing that the next time will be easier. If you can withstand an open mic, no live performance will ever be as hard. I promise. And when people start paying to watch you perform, the challenge of converting the audience disappears. It’s incredibly enjoyable, of course, but the drive and hunger to try and persuade that audience to listen to you will keep you motivated to improving your craft.

You’ll instantly spot weird habits or bad technique. Now it’s so easy to do on your phone there isn’t an excuse. It was a shock to discover only after promising my audience a ‘Daily Shred’ video that I was making similar mouth movements to John Mayer. It’s really awkward to watch, but at least now I’m aware and can make some changes!

Rehearse with other musicians

Rehearse with musicians that are better than you. It will be a challenge, but this will help you improve. There will be things you pick up from others that will save you time. They don’t have to play the same instrument as you either, I’ve learnt a significant amount from my band members.

I still go out busking (in the summer). It’s a great way to practice and the expectations are low. But if you offer something people like, they might just stop for a moment and you could even walk away with some cash in hand.

Teaching doesn’t have to be professional. Pass it on. When you’ve learnt something cool and you’re jamming with a friend, be patient and give them a few tips. It’ll be a confidence booster, as you’ll start to see how much you’ve progressed. It also puts your head in a different space. You realize how awkward playing an instrument is; just try putting someone’s hands in the shape of a G major chord on the guitar without them wincing or complaining of their hand aching.

I grew up with and have worked around a lot of professional musicians and guess what? They had to practice just to stay as good as they were, let alone improve. It’s an uphill battle, with little (and sometimes big) wins along the way. The journey is the whole game. There might be demoralizing moments but overcoming them can be immensely rewarding. Start with five minutes a day. Everyone has five minutes and eventually make more space for it in your life. It’ll become a necessity to pick up your instrument every day, as you’ve finally created the habit.

Playing guitar should be fun. Avoid trying to learn something tricky when you’re tired or have cold hands and just remember why you bought that guitar in the first place. Learn the songs you want to, not the songs you think you should. Laugh off the mistakes and don’t be put off by anything or anyone. Happy practicing!

In recent years, Mary has toured the UK and US in support of singer-songwriter Gabrielle Aplin and legendary Echo & the Bunnymen frontman Ian McCulloch. Yet she still finds time to practice. Check out her website at: www.maryspender.com