From the Shure Archives: The Model 99 Radio Modulator

Corporate Historian Michael Pettersen shares the stories behind some of his favorite archival treasures.

With thousands of treasures to choose from in the Shure Archives, it's impossible to say which are the most important. Each has a story. In this series, I'll share with you some of my personal favorites, including the Model 99 Radio Modulator.

Since 1976, I have worked at Shure on teams from sales to product management to applications engineering. Music performance and history were passions. In 2016, these worlds coalesced when Shure President/CEO Christine Schyvinck decided the company needed a corporate historian. She asked me if I was interested, and I accepted without hesitation.

My involvement with documenting Shure history dates back to 1995. The company's 75th anniversary was looming in 2000. To commemorate it, I suggested a book celebrating the company's history. Much of the content came from a small, crowded archive closet.

Today the Shure Archives have a dedicated space of their own. Senior Corporate Librarian & Archivist Julie Snyder maintains the collection. Together, we preserve the history that Mr. Shure and Mrs. Shure held so dear.

In 1933, the Model 99 Radio Modulator made its first and only appearance in a Shure product catalog. The Modulator, boasting "1,001 uses," was capable of transforming any AM radio set into an "efficient and low priced Public Address system." Designed to operate with the Shure Model 33N Two-Button Microphone, the Modulator setup was as easy as plugging in the device, connecting it to the mic, attaching two wires to the aerial and ground terminals of a radio set, and tuning the radio to "about the middle of the dial." By flipping a switch on the Modulator, a customer's radio was became a PA system. 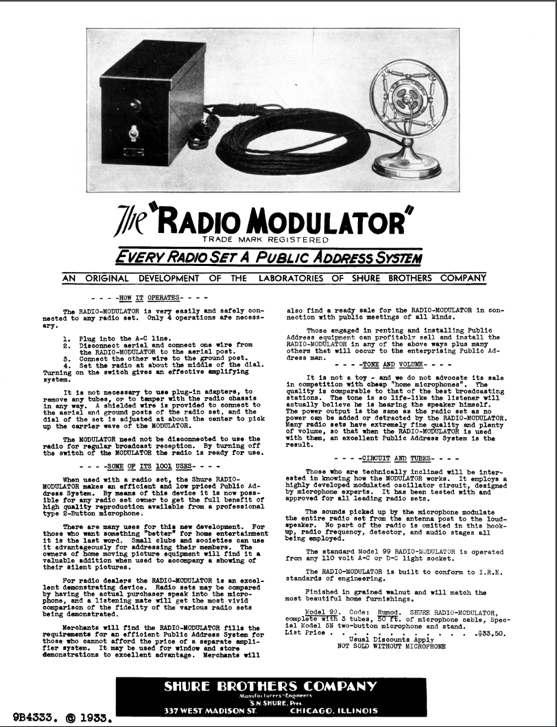 While we don't know whether any of these applications had traction at the height of the Great Depression, we do know that the Modulator did not appear in a Shure catalog again.

During the war, there were many low-cost PA systems on the market. At that time, metal objects like the Modulator were routinely melted down for armaments. Our Modulator, which we acquired from an online auction site, may be the only one in existence.

For every SM57 or SM58®, there were other products that failed to get off the ground. Some were leap-frogged by newer technologies. Others, like the Modulator, were ahead of their time. Without our collection of Shure product catalogs that date back to the late 1920s, the stories of interesting but unsuccessful Shure products would be lost to history.

We're always interested in adding historical Shure products to the archives. In addition to auction sites, people who stumble upon old Shure products when cleaning out a basement or garage are sometimes the source of items in our collection. If this happens to you, let us know in the comments. You might be the source of the next great Shure Archives find.