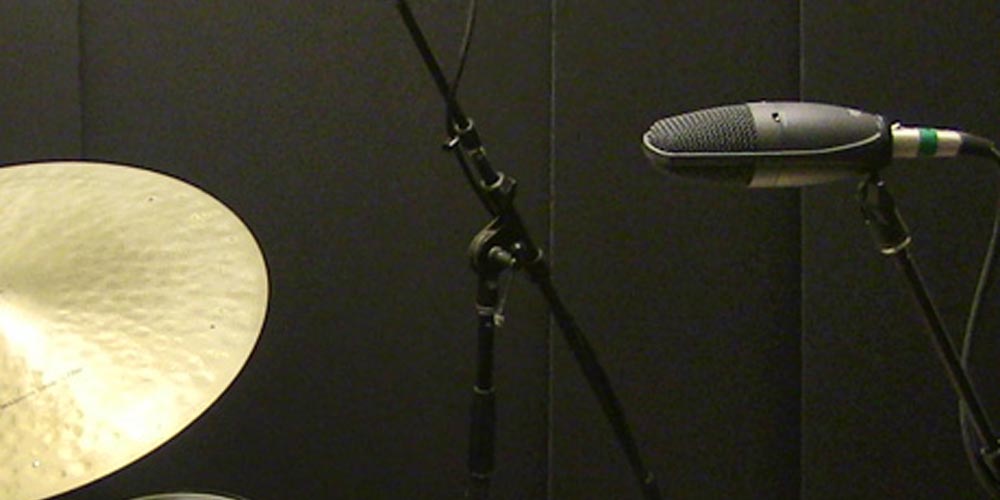 Editors' Note: For many years, one of Shure's corporate missions has been to further music education around the globe.  But our commitment extends far beyond contests such as Fantastic Scholastic (now in its ninth year), where college teams compete for a valuable mic locker.   It often starts with a much younger audience and here's why: education in the arts influences academic achievement.  Music theory is math. Songwriting is literature.

Shure has been a sponsor of the East Bay's Soundwall Music Camp, a non-profit organization that runs two one-week sessions for campers aged 12-17 on the campus of UC-Santa Cruz.  When Music Director (and drummer) John Xepoleas contacted our editorial staff for a gear assist, we were able to come through for the teen campers.

The campers were there to learn.  But did John discover anything?  Here's his story:

"About a year ago, Shure sent me a box of microphones to use for the recording classes we offer at the Soundwall Rock n' Roll Summer music camps. I received the mics in April and since the camps don't take place until July, I was compelled to check out the goods.

The job at hand was to see how well the mics worked for recording a rock drum set.   I was already using a Beta 52 to mic the bass drum, an SM57 to mic the snare and a set of SM81s as overheads. The box contained three SM27 large diaphragm condenser microphones.  I'd never used or even heard of an SM27.

Round One: The first order of business was to use the SM27s as overheads on a basic 5-piece drum set.  I kept the switchable frequency filter flat and placed the mics about 3 feet apart and 18" or so above the cymbals.  (Figure 1)  I put the Beta52®A inside the port-hole of the bass drum facing the bass drum beater and placed an SM57 about 2 fingers distance off the snare head. I put a couple of Beta 98s on the rack toms, the third SM27 on the floor tom and added an SM 81 to the hi-hat.  All pretty basic drum miking techniques.

My next order of business was to fire up my Pro Tools® rig and see what these babies sounded like.  I hit the record button, laid down a couple of simple rock grooves, gave the hi-hat and cymbals a workout and played a few fills around the set.  After about 10 minutes of doing what I love most to do – playing the drums - I put down the sticks, turned on the studio monitors and sat back to hear how it sounded.

To start with, I just listened to the SM27 overheads. To my great surprise, everything sounded really good.  I was missing the punch from the bass drum, so I brought up the channel with the Beta 52A into the mix.  At this point I was only listening to three mics and the drums sounded fat, full and crisp.  I wanted a bit more crack from the snare, so I brought up the snare channel.  And that was it!

With only four mics, I had just about everything anyone could want in a drum sound. The cymbals sizzled and I was hearing plenty of hi-hat.  The toms sounded so full that I thought I left the tom tracks on by mistake.  The snare drum had a nice crack and presence and the bass drum had the perfect amount of attack and bottom end.  I couldn't have been happier.

For the final step, I added a taste of the tom mics into the mix for a bit more clarity and separation plus a little more bottom end on the floor tom. I also added a tiny bit of the hi-hat channel to the mix with a bit of EQ for some extra sizzle.  This worked nicely to polish and refine the really nice sound I was getting with just four mics.  Success.

Round Two: For this round, I swapped the SM27 on the floor tom for a PG56.

I took the SM27 and placed it at the opposite end of the room – about 12 feet away - facing the kit.  I added some compression to the channel.  In fact, I compressed the heck out of it at about 100:1, then I bashed away for another ten minutes.

When I first listened back, the beautiful drum sound I was hearing before now sounded really crappy.  I realized that the room channel was blasting through the mix with its raw, over compressed sound.  I brought it way back in the mix and was able to find a perfect point where it gave the drums a really nice full open sound and a welcome option to the close miking sound I was getting before.  Another success.

Round Three: Now it was time to put the mics to work on a live jazz recording session.   For this session, the group included acoustic bass, guitar, trumpet and drums.

The drums were a classic Gretsch be-bop set with an 18" bass drum, 12" and 14" toms, snare, and a beautiful set of Zildjian Constantinople cymbals and hi-hats.  (Figure 2) Once again, I used the SM27s as overheads, an SM57 on the snare and the Beta 52A on the bass drum.  For this session, I placed the Beta 52A about 4" away from the bass drum facing the right side of the drum. (Figure 3)

We sound-checked the drums and they sounded great.  In fact, we only ended up using the snare channel for one song where I played brushes.  The cymbals sizzled, the toms cut through and the snare fit perfectly into the mix.  With the mic placement described above, the small jazz bass drum sounded round and full.

Miking the rest of the group.  We were all recording in the same room at the same time, so we needed some isolation.  We faced the guitar amp away from the drums and miked it using an SM57 facing the speaker.  The trumpet player was on the other side of the room also using a 57.  The bass player played through a small amp using his pick-up. But in addition to that, we used an SM27 placed directly in front of and about six inches from the strings, with the capsule halfway between the bridge and the bottom end of the fingerboard.  The bass sounded great.  Plenty of bottom end yet plenty of articulation.  When mixing, we were able to find a really a nice blend of the pick-up and mic sound.  Later, a seasoned jazz musician friend of mine heard the recordings and was amazed at how good everything sounded. He said, "I've recorded in some of the best studios in the world and haven't heard the drums and bass sound this good".  I guess the proof is in the pudding.

Round four: A much different type of session.  This time it was a young talented saxophonist playing along with pre-recorded tracks for his college auditions.

I have a few mics that I would normally use on a saxophone, but I thought I would try the SM27. He played for a few minutes, and then we gave it a quick listen.  He absolutely loved the sound of his saxophone.  No EQ, no fuss, no muss, just his tenor and the SM27.   We both agreed that there wasn't even a need to listen to any other mics.  I'm not saying it was because of the microphone we used, but he did get into the college of his choice.

Final Round: Recording a twenty-piece big band in a concert hall.  Needless to say, I had to use just every microphone I own.  This time I used a couple of SM81s for drum overheads along with the Beta 52A on the bass drum and a Beta 56®A on the snare.  We used a couple of small condensers on the piano, the bass went direct, and we used a '57 on the guitar amp.  We used SM57s for the trumpet, trombone and sax soloists.  (They seem to isolate the sound in this type of setting much better than the large diaphragm condensers)  We also placed two large diaphragm condensers about 10 feet in front of the horn section.  For our room mics we place two SM27s on the concert hall's back wall - about 70 feet from the front of the stage.  Once again, the SM27s did a great job.  When mixed in with the close-miked instruments, they gave the band a full round live sound with plenty of definition.

And there you have it.  In a short period of time the SM27 has gone from a microphone I'd never heard of to my microphone of choice for many different applications.

ABOUT JOHN XEPOLEAS: John started performing and teaching in 1970 and has been an active part of the San Francisco Bay Area music scene ever since. He received his Bachelor of Arts in Music Performances in 1978 and published his first book, Studies for the Contemporary Drummer" in 1991.  He also authored "Lessons with the Greats" in 1993 and was appointed Music Director at Soundwall Music Camps in 1995.  Her performs with The Fundamentals and Fundz Jazz and is available for private and Skype lessons.  More about John here.