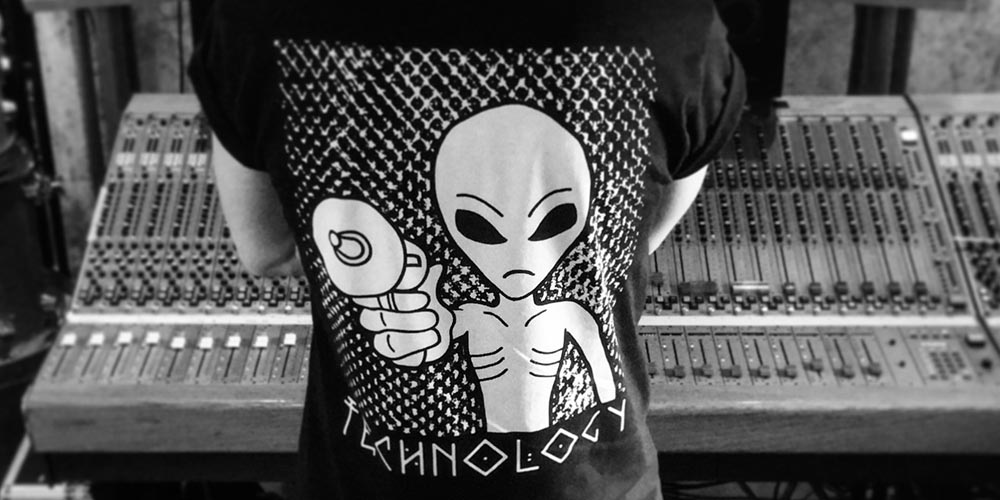 They say good things come to those who wait, and this statement certainly seems to hold true for London-based engineer, Drew Bang. In 2016, he was shortlisted for a UK Music Producers Guild (MPG) award in the 'Breakthrough Engineer' category. Fast forward just two years later, and Drew is the engineer behind MPG Award-winning track 'Lights Out' from Royal Blood.

To celebrate his recent success, we met in the resident bar of east London's Strongroom studio to talk through his approach and journey so far. As the conversation unfolds, it's clear that Drew's determination to succeed, creative thinking, and refreshingly personable approach are key characteristics that define his work to date.

Can you give us an overview of your career as an engineer and how you got started?

I'd probably say, I'm what you'd call a hybrid engineer, in that I've spent most of my time working through professional studios, but my approach isn't that of a technically orthodox engineer in the traditional sense. I don't have a mathematical brain, so I trust my ears and try to base my workflow on what needs to be achieved, rather than how it should be. I have technical knowledge, but I try to unlearn what I know, as I think more times than not it gets in the way.

I think there are increasingly more engineers like me, though most go about it in reverse: basically self-taught bedroom engineers that pick up large format console flow later.

I started my career super late, at the age of 30, which has been a challenge for me coming up. I was previously homeless at 27, and I used to sleep in doorways around Shoreditch, near to Strongroom Studios.

After some incredible luck, I got some help and managed to turn things around, that's when I decided to move back to London after a three-year absence, to tackle the music industry head-on.

I went back to uni, with a class full of talented 18-year-olds, which was incredibly humbling and when I graduated, I spent a few years scraping by on the dole. I took internships and work experience roles, looking for any opportunity I could — man I was poor!

In 2012, Phil Sisson (former manager of Strongroom) took a punt and gave me a shot as a studio runner, from there it's been a steady path of running, into assisting, into engineering and now production. I've never worked for anyone or modelled my work on anyone else's style or methods. So I've kind of absorbed knowledge from around me, discarded all the junk and bad habits that people swear by and tried to do what comes naturally to me, while keeping in mind some irrefutable laws.

You recently worked with Royal Blood on their second album How Did We Get So Dark? and their award-winning song 'Lights Out.' Can you talk us through that project?

I got the job on this through my work with producer Jolyon Thomas, whom I'd recorded for many times before. Initially, we were brought in to deliver six tracks; we had ICP Studios in Brussels booked for six weeks or so from November 2016. We got in there and life was good, ICP is an insane studio to work in, fully residential and the gear list they've curated over the last 30 years is to die for. I was in my element.

When we'd spoken to the guys in pre-production, it was important for them to try a different approach on this project to that of the first album. We took our time with it, moved drums around the room a few times, tried to be open to change during the tracking process and just tried to have fun with it.

We worked in Studio A, which is an SSL G Room, a great sounding board which worked really well to capture the weight of front-man Mike Kerr's signal chain without adding any further coloration. What you're hearing, laid down is his pure tone — he really knows what he's doing with his pedals.

The album was tracked into Pro Tools HDX, entirely. I used a few outboard preamps, and a lot of compression, but we were very conscious of the sonic expectations for a band like Royal Blood (heavy with a lot of weight but with clarity and high fidelity). I used mainly dynamic mics as spot captures on drums and guitars, for that direct capture. I used tubes or ribbons on room and smash mics, for that "gritty" energy.

We nailed those six tracks, and the label just said: "Can you go ahead and finish the album please?" And we did. The studio was able to accommodate us, and there was a lot of writing that happened in that extension, we ended up staying there for nearly three months and wrapped at the end of Jan. A lot of Belgian beer was consumed during the making of this record.

The result sounds great and 'Lights Out' is a well-deserved winner in the UK Music Producers Guild's UK Single of the Year category. What do you think makes it stand out?

Well, firstly I think that people will have been surprised by the backing vocals. It was something that Mike had a very clear vision for, to develop the sound without deviating too far from what people knew, which is why he's supporting himself as opposed to using other singers. Drummer, Ben Thatcher wasn't about to get involved.

It's a pretty relentless track, straight in with that off-beat confusion drop, you can't go wrong with that for getting people's attention. And the beat is classic (Royal Blood drummer Ben) Thatcher: straight power rock, totally unapologetic.

It just powers on as a track, hits you when it needs to, completely delivers and then they come at you with the most ridiculous drum fill ever, and you're like… Royal Blood are back!

Frontman Mike Kerr leads with a bass – does that change your approach as an engineer somewhat?

I dunno really, he's a fantastic guitar player, the way he plays his bass is much more adept than you might think. The nuance of his playing style fills out so much of the soundscape that it feels greater than it is, it reminds me of Brian May's style a lot.

He has a short scale offset bass with light-gauge strings, so he can make the bends. He splits his signal across a couple of Pog pedals and runs bass amps and guitar amps at the same time, with line selectors, and that's how you get that depth, through harmonic distortion.

There are, as always, a lot of phase correlation issues to consider with multiple amps running at the same time, but the way I like to track guitars is pretty conducive to this. I take a DI, then run a Shure SM57 and either a ribbon or an LDC near coincident, phase aligned to the best sounding cone on the cab, then dialed in on the board for tone and summed to a common group output.

The drums were done in three takes or less, because Ben is that good, and then we moved on to overdubs for guitars. So, it's a sweet gig, fewer cooks to spoil the broth.

What does the MPG award mean to you?

Oh Man! It's amazing! I remember when I graduated from my audio course, I was so depressed with the position I was in: no work, no money, no industry love at all.

I set myself some very clear career goals at that time, one was to get a job at Strongroom, full circle. Another was to win an MPG award.

I read an article on the awards, it must have been 2011, in Resolution Magazine, and I clearly remember saying to myself, I reckon I could make that happen if I went about things methodically. Seven years later, and here we are, 'Lights Out' is an MPG winning track! I'm pretty happy about that, to be fair.

Congratulations! How would you describe your signature approach?

My engineering approach is one of pragmatism. I think in clear steps, so it's: "Listen to it, choose a mic that'll adequately capture it, stick it in a place that'll sound good, set your gain structure, color it, process it, press record and hope Pro Tools doesn't crash."

As for my sociological approach, I'm just myself, I don't go to work and be an engineer, I'm just me doing some engineering. So if you hire me to work with you, I'm not sitting in the corner trying to breathe quietly, I'm turning up and wanting to share a beautiful experience with you, something unique that we can have between us and share with the world, something existential. Also, hugs! Hugs are very important for dispersing anxiety or ego and they feel great, start and end every day with hugs!

If you could name one album you wish you'd engineered, what would it be, and why?

Pfffffft! That's a hard one! I'm going to go with BAD! Michael Jackson. Seriously one of my all-time favorites — the dream team, (Bruce) Swedien and Jones! I met Quincy Jones recently, during recording for U2's Songs of Experience. That man has some excellent stories.

Imagine all you would learn in a recording session like that? The anecdotes, the talent! That album made me want to record; it's exquisite to the ears, a masterpiece of performance, engineering, and production.

To learn more about Drew Bang and his work, visit www.drewbang.com or follow him on Twitter @drewtothebang