Dualdyne Technology and the Unsung Heroes of Live Performance 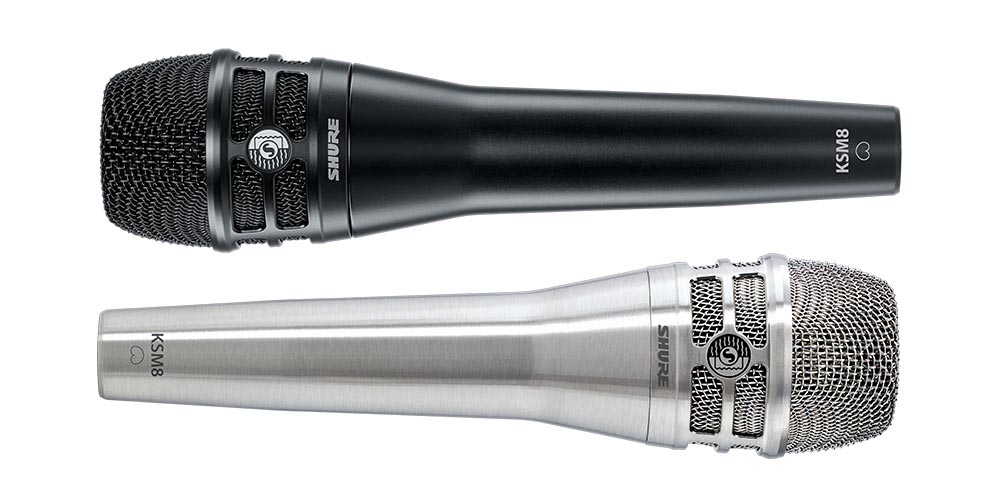 At this year's NAMM show, we launched our first all-new dynamic microphone for nearly 50 years — the KSM8 Dualdyne.

Since the show, much speculation has emerged about the 'dual' in 'Dualdyne,' and what this term actually means. The confusion is not completely unfounded either; the concept of a microphone with two diaphragms isn't actually new. It's not even unique within our own portfolio (KSM9 springs to mind). The KSM8, however, is unique in being a dual-diaphragm, moving-coil stage vocal mic — hence the title 'World's First Dual-Diaphragm Dynamic Handheld Microphone.'

The most common misconception stems from a misunderstanding of dual-element (or dual-capsule) microphones, and how they differ from single-element mics with two diaphragms.

The AKG D200 Range is a perfect example: These 'two-way' microphones were developed in the late 1960's. They use two separate capsule elements; one for high frequencies and one for low frequencies (they are dual element — or 'two-way'). These dual elements are passively combined using a crossover network inside the mic to create the final output).

The KSM8 Dualdyne has a single element that receives the entire frequency range. The second diaphragm sits in the resistance network of the microphone, where the frequency and polar pattern are set.

Dual-element microphones control proximity effect by working like a two-way speaker in reverse; the KSM8 Dualdyne changes this approach by controlling proximity through the microphone resistance network. To achieve this, we had to reverse the airflow of a dynamic mic so the second diaphragm would fit. This alone, was a massive engineering project spanning seven years, as Product Manager, John Born explains:

"To re-imagine a mature technology like the dynamic microphone is a huge project. It required us to simultaneously embrace and reject everything we knew. That meant having a deep understanding of all previous designs, notably the Unidyne III capsule and shock mount system used in the SM58. At the same time, we knew we were going to break pretty much everything, which resulted in us quickly realizing we couldn't allow ourselves to be bound by pre-existing tools, parts, and processes. We really did start from scratch."

With no active electronics involved, developing a dynamic mic is essentially you against physics. John and his team had to delve deep into the Shure archive — studying page upon page of mathematics to determine if the Dualdyne concept was possible. The ultimate goal was a mic that possessed similar qualities to our KSM9 condenser mic (where a dual diaphragm design controls proximity effect) only in a dynamic microphone.

The key required qualities were as follows:

How does the Dualdyne work?

The Dualdyne concept is an evolution on the original Unidyne capsule developed by Shure back in 1939. The Unidyne was the world's first single-element unidirectional dynamic microphone. This giant leap forward changed the world of microphones as we knew it by its ability to produce a consistent cardioid polar pattern using only one mic element. In fact, every directional dynamic microphone in the world today is based on the original Shure Unidyne patent.

The Dualdyne builds on the original Unidyne concept by using two diaphragms in a single element design. The second diaphragm sits within the rear-entry airflow, which enables us to tune and control proximity effect in a way that's never been done before. This unique diaphragm placement — combined with reverse airflow — is what sets the KSM8 Dualdyne apart from other dual-diaphragm mics. The concept was so unique, we had to develop brand new parts and manufacturing processes to make Dualdyne a reality. You can learn more about the entire process, directly from John Born, in his post about the KSM8.

Why Does it Matter?

Microphones, in many ways, are the unsung heroes of live performance; they rarely have stage presence, modern designs are discreet, and most audiences only really become conscious of their existence when something goes wrong. As professionals in the audio world, it can be easy to forget that most people really don't care about the microphone on stage — I mean, really, when was the last time you booked tickets to see a microphones début performance!? The reality is, although we as professionals understand the importance of proper microphone selection and placement, the vast majority are there to enjoy a show, listen to a speaker, or communicate with their colleagues. In many ways, microphone technology is best when it blends seamlessly into the application environment.

Does that mean microphones are inconsequential? Absolutely not. Microphones are the first piece of equipment in the signal chain; just like your home hi-fi, the end result is only ever as strong as the sound source.

When things are right, a microphone can raise a performance to new heights; when things are wrong, the result is disastrous for performer and engineer. Like Unidyne before it, Dualdyne technology is a substantial step forward in allowing microphone technology to work seamlessly for a smoother, more natural performance. For the artist, the huge sweet spot and natural off-axis bleed allow for a more free and creative performance. For the engineer, a natural sound and more comfortable artist reduces stress on the job. Ironically, by blending into the performance environment, Dualdyne can truly shine as part of a proud and long line of unsung heroes.