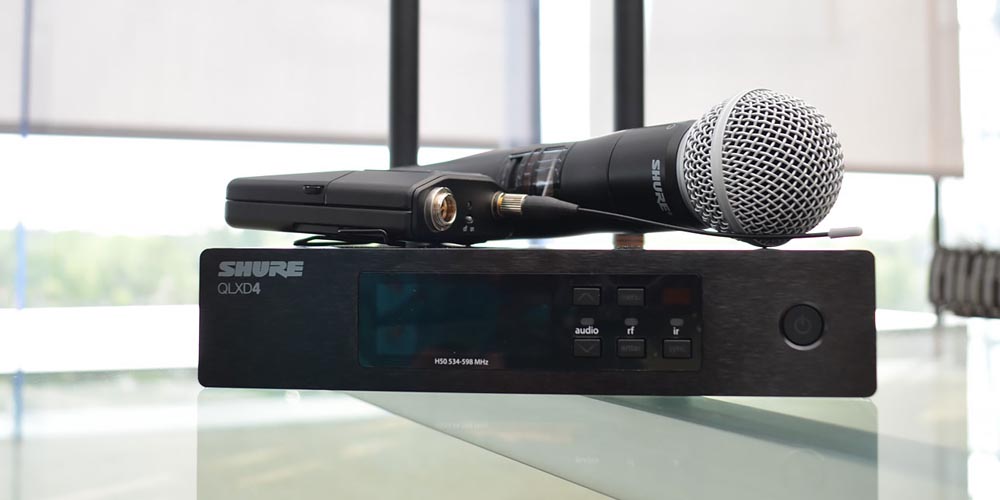 Digital wireless systems are increasingly common  in the world of professional and semi-professional audio. Their growth  over the last few years is the result of many factors, from the  continual pursuit of better quality sound to the increasingly pressing  issue of RF spectrum clearance. Like other areas of the audio world,  though, the debate as to whether digital is better than analogue, or  vice-versa continues to rear its ugly head, causing a plethora of  misconceptions, and/or questions. To help settle the debate – at least  for a while – our Shure UK Applications Engineer, Tom Colman has kindly  answered some of the most common questions we receive about digital  wireless systems.

1) Why do I need digital wireless? My stuff works fine RIGHT now!

Two words; spectral efficiency. Demand for wireless microphones  increases year on year, while at the same time, the amount of clear  spectrum available is shrinking. More mics in less space means it's  going to get crowded pretty quickly, and the amount of radio 'space'  each channel takes up needs to be reduced to keep up with demand.  Wireless spectrum, after all, is a finite resource; there is only so  much to go around. If the demand for wireless products across the board  continues to increase at the current pace, all users will need to be  more spectrally efficient (including consumer goods).It's a bit like lanes on a motorway. Previously we had, say 8 lanes,  and only 3 big-ass trucks needed to run simultaneously; not much traffic  and plenty of space. Now we have 4 lanes and we're trying to run 20  trucks side by side; there's not a lot of space. Using efficient digital  systems, it'd be like running 20 super-narrow trucks in the same 4  lanes; a solution that will actually work.

2) How does the audio compare? Is it true that digital wireless doesn't sound as good as analogue?

Ah, the age-old analogue vs digital question that is always laced  with subjectivity. For wireless mics though, it's more objective.On the whole, digital radio microphones will have more low end, top  end and arguably sound more clear than analogue. This is due to a couple  of reasons. Analogue systems are bound by the constraints of FM  modulation which extends to highs around 15,000 Hz. Audio above this  frequency is considered hard to hear at best, but it is noticeably  missed when not present. This is especially true on bodypacks used for  electric guitar where there will be more high-frequency content. The  frequency response of digital systems such as ULX-D and QLX-D is  20Hz-20kHz, which results in a very full sound.The other thing is, digital systems are not subject to noise picked  up while being transmitted. In a digital transmitter, the first process  applied to the incoming audio is the Analogue to Digital conversion. Now  that the audio is represented in 0's and 1's, the transmitter will use  what is typically a proprietary form of digital modulation to send this  data. As the data being transmitted is digital, the receiver can  perfectly recover the digital ones and zeros, thus recreating a perfect  reconstruction of the original analogue sound – as well as avoiding  picking up noise. This process also allows the frequency response to be  much wider than analogue as we are no longer bound by the limitations of  FM modulation.

3) Are digital wireless systems all WiFi?

Digital wireless doesn't mean that it's WiFi. It refers only to the type of data being transmitted by radio.As an example, Shure's QLX-D and ULX-D systems both use UHF spectrum  in the 470-790 MHz band, whereas the GLX-D system uses 2.4 GHz (2,400  MHz) WiFi. Don't worry, though, you're not going to start picking up  other peoples' facetime calls on your receiver; while coexisting with  WiFi, intelligent 2.4GHz systems consider this traffic as interference  and avoid it automatically, which brings us neatly on to the next  question...

4) Does WiFi interfere with digital wireless?

Interference is always a concern when multiple services are sharing  spectrum. Just like in our motorway example earlier, if there's more  than on car on a road then a collision is possible. Our GLX-D system  uses the same spectrum as WiFi (2.4 GHz), and so there is a chance of  interference. To counteract this we need specialist technology that  continually scans the 2.4GHz landscape to hunt out and avoid  interference, leaving you with perfectly clean, interference-free audio.  YAY!

5) Does digital mean no interference?

For 2.4GHz based digital systems, please see above.For UHF based digital wireless systems, you need to coordinate your  system to avoid external sources or interference in the same way you  would an analogue system. The factor that swings in your favour, though,  is the spectral efficiency of the system; so in the instance of getting  interference, you are more likely to be able to avoid it. It's because  the 'footprint' of digital wireless is way smaller than analogue, giving  it more space in which to operate.Some, more advanced digital systems (such as Shure ULX-D) have  frequency diversity built-in. This permits two bodypacks to be used on  two channels as a pair, to mic up one presenter for example. The audio  from both packs is assessed by the receiver, and at any one moment, the  best quality audio is routed to the receiver's XLR and Dante outputs, so  if pack one goes bad, then the good pack's audio remains on.  Admittedly, as soon as there is a break in the event, you need to  replace the bad frequency with a clean frequency for pack one, but as  far as the audience is concerned, you had no interference - phew!

6) How many systems can you use together?

The amount of systems you can run at any given time depends on the  system you're using and the spectrum it operates in. To give you an  example, a Shure GLX-D system allows you to use up to 8 systems  together, but this requires the 2.4 GHz spectrum to be super clean. In  normal circumstances, I would recommend using up to 4 systems together.  If you need to regularly use more at once, then I'd (carefully)  recommend using BLX or taking the jump to QLX-D.Higher-end UHF based systems (such as QLX-D and ULX-D) can use up to  67 channels per frequency band. ULX-D also offers a High Density mode  where up to 500 channels can be made to work together.

7) Does digital wireless still require antenna distribution and if so, can I use my existing distro/antenna?

GLX-D has fixed antennas and so does not need Antenna Distribution. That said, please still pay attention to antenna placement;• Try to ensure line of sight• Minimise transmission distanceQLX-D and ULX-D both use UHF spectrum and providing that your distros  cover the RF range that your kit operates on, you'll be fine.

8) What's the range on digital wireless? Is it less than analogue?

The digital UHF systems have a similar range as other analogue UHF  wireless microphone systems. There's no difference in the carrier  frequency; the only difference is it's carrying digital information  rather than analogue.Systems operating in the 2.4 GHz band use a higher frequency to  transmit audio and so will have a lower, or smaller operating range.  Physics is physics.

9) Is it licence free because it's digital?

The 2.4 GHz band is a license free part of spectrum and is available  globally. It's limitations are the number of wireless microphones it can  host; about 8 maximum. It's also relatively susceptible to interference  as there are many other devices that use this band (mainly phones,  tablets and laptops using WiFi). For this reason, we must build in  features to avoid being caught out by interference (Interference  Detection and Avoidance) as described in point #4.Wireless systems operating in the UHF bands (QLX-D and ULX-D) require  licencing just like any analogue radio microphone would; either a  channel 38 license or a site-specific license.

10) Why would I need encryption?

Radio microphones are used at a large number of events where  sensitive information is shared. Without encryption, it's possible to  receive the signal from a radio microphone on a separate receiver tuned  to the same frequency and with a similar modulation scheme (digital or  analogue as appropriate).As unlikely as it many may be that anyone would spy and try to steal  sensitive information, it unfortunately does happen in the interests of  gaining a competitive advantage.Analogue radio microphones cannot be encrypted. Digital data can be  encrypted using the AES-256 standard so that the transmitter sends the  encrypted data rather than the unencrypted source data. Now, if a  digital receiver is tuned to the same frequency, but doesn't know the  encryption key, no audio will be recovered; your sensitive information  remains safe.

11) Can I send it over my existing digital audio network?

A digital radio microphone system refers specifically to the RF  modulation scheme. In the receiver this is converted into an analogue  audio signal for connection to an analogue desk or a guitar amplifier.There are an increasing number of  applications where keeping the audio in the digital domain has  advantages. Shure have teamed with Audinate to use the Dante Digital  Audio Network Protocol. Only our ULX-D dual and quad receiver systems  have this capability. The audio from these receivers can be streamed via  a network to other Dante receivers. (While confusing at first, the  ULX-D wireless receiver becomes a Dante transmitter…). Remember that  there are specific network requirements in order to do this; primarily a  low-latency gigabit network with Quality of Service features engaged.  Learn more here.

12) Are rechargeable batteries worth the extra cost?

Yes. As well as being green and good for the environment, the lithium  ion rechargeable cells will save you money and simplify your inventory –  cutting out last-minute trips to purchase AA batteries just before your  gig (yep, we've all been there. Why are batteries SOOO expensive?!).Here's a cost comparison of one transmitter that uses fresh batteries  once a day, and is used 4 times per week. Prices of AA batteries were  from the website, linked here: It's clear that although the upfront cost for the rechargeable cell  is greater, the cost savings kick in around the 1 year mark. A no-brainer really…

We hope the list of answers in this article helps answer some of your questions about Digital Wireless Systems.