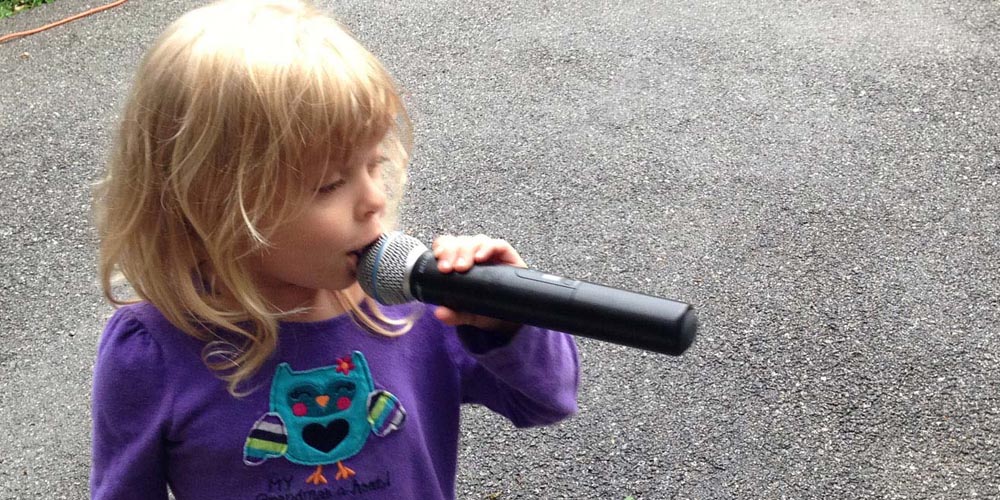 It's been a few months since Part One of this series was published. If you haven't read Part One yet, stop right here. I want you to get the full scope of the questionable mic techniques I bear witness to on a daily basis. (Yes, daily.) Part One entertains as well as educates, if I may say so. You're going to learn but also have a laugh or two, and perhaps a few "aha" moments (the surprise kind, not the '80s pop band kind).

Anyway, since I last left you, I've gone to a few rock shows, trade shows, studios and award shows. I have added to my collection of sticky passes and laminates, but more importantly, I've seen some mic techniques that even my very young daughter would know are not going to produce desirable results. I was in awe that looking cool was preferred over sounding good in front of an audience.

For Part Two, we're going to explore the musical side of mic technique. Let's start with the easy target: the rapper and his hype man or men, depending on ego size. I'm sure you've seen them on stage grabbing the grille of the mic in their hand as if they're trying to crush it, seemingly spitting verses into their fists. The hype men follow, with their one- or two-word contributions, and all of these guys look cool and fierce in front of their fans. But how does that actually sound? I've been to a few concerts, and I'm sure you've also heard the audio that results from this technique.

First, the entire low end drops out of the audio signal. Everything starts to sound mid-range-y, and at times a bit distorted. Even more fun for the performer and crowd in attendance, feedback can rear its ugly head. Yes, it's true: this technique does make the mic sound louder on stage, but, assuming you have a sound guy trying to make this whole hot mess work and sound halfway audible, that's not the job of the performer.

Cupping the Mic: From Bad to Worse

I've actually had artists come up to me at trade shows and ask us to produce a mic that would allow for excessive cupping as described above. I've explained that there's a lot of math and science and physics that go into microphone design, and the mic needs to kind of breathe to perform properly. Covering the bottom part of the grille sort of cuts off the mic's circulation. Would you be able to perform as well if someone had you in a choke hold? Kidding. Of course I refrained from that last bit during our conversation, but think about it. It was suggested that maybe we could develop a mic with tubes that lead to the base of the mic that would allow the diaphragm to perform properly. A better alternative for artists: learn how to hold a microphone, and leave the science to us.

I've heard the argument that the hand just naturally ends up there, covering the grille. I've had sound engineers suggest we develop a mic with barbed wire around the area just below the grille to keep an artist's hand from getting remotely close to cupping. Harsh, I know, but these guys get pretty frustrated when dealing with artists who focus on how cool it looks instead of how good it sounds.

Perhaps the most frustrating evidence of poor mic technique is when vocalists, both A-list and mid-level, adopt this method of "hip-hopping" the mic when on stage. Honestly, the hip-hopper can get away with this, as they're mostly reciting poetry. There's not a lot of inflection in their vocal. When one tries to sing while cupping the mic, all of the issues I mentioned earlier are even more noticeable.

I've watched engineers attempt to make things sound better with lots of EQ and compression. With a lot of work and a little luck, they can get things to sound good enough. Is "good enough" where you want to be when performing in front of a sold-out arena crowd? Different microphones from different manufacturers are introduced into the fold. Some work, and some don't. Satisfactory results are achieved, but it's never ideal, and issues still exist. I've had conversations with engineers about how this mic didn't work, but this one produced "good enough" results. One thing to argue here: the first mic most likely would have worked just fine if used properly. If you don't use something the way it was intended, then you might have some issues. Try driving your car on the highway and keeping it in first gear the whole time. Sure, you'll get there, but not quickly. You most likely will cause engine damage and hear the disapproval of the other drivers around you. You can't blame the manufacturer for the car not performing well if you drive it that way.

When I suggest to engineers that perhaps they should talk to the artist in question about their mic technique, they typically balk at this suggestion for fear that the observation will be met with confrontation and perhaps their dismissal. Someone has to do it, though. Maybe a close friend or unbiased engineer? All I can do here is report what I see, without naming names.

Our good friend Roger Daltrey suggested we have this conversation with artists we meet who are employing this questionable mic technique. During an interview a few years back, he stopped the question-and-answer period and asked:

"What's with these singers holding the mic like this [holding an SM58® in his hand and cupping the grille]? I did this in the early days with The Who, and if someone would have told me what that sounds like out front, I would have stopped  a lot sooner. You have to have this conversation with them. They need to know what that is making their vocals sound like."

Well, Mr. Daltrey, here's our attempt at an open letter to all those who utilize poor mic technique. Perhaps no one ever taught them or let them listen to the differences, or they're just too focused on how cool it looks on stage. I will remain optimistic that someday artists at all levels will get it. If a three-year-old can figure it out, then they (and you) can, too.