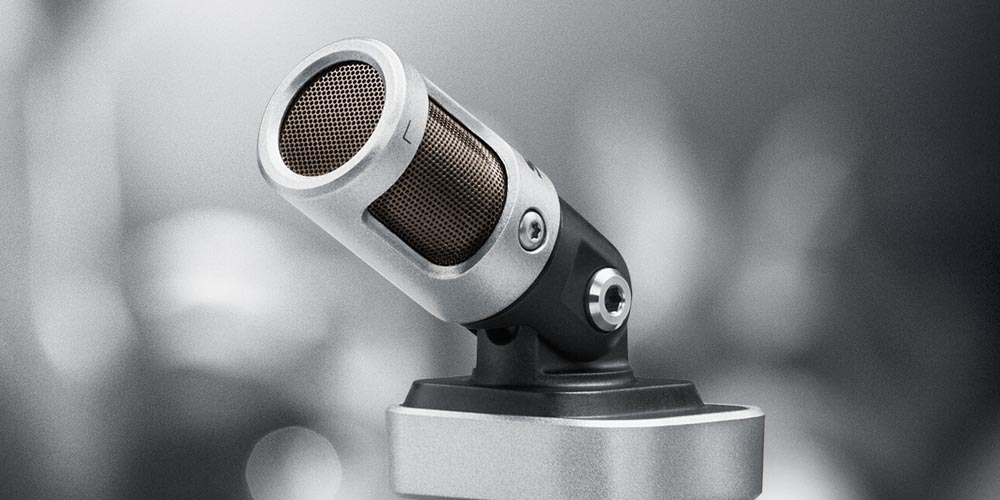 In the photography world there's an old saying that goes, "The best camera is the one in your pocket." These days, that means the camera in our smart phones. The onboard cameras have come a long way very quickly, allowing anybody to produce high-quality pictures. All you have to do is shoot, add a filter, and instantly post it online.

What if I told you all of that was just as easy with sound?

Here are four reasons why you need one.

I've been a drummer since I was a teenager in bands that are loud and heavy, and my current band is no exception: a four-piece with drums, bass and two very loud guitar players.

Before the MV88, we'd write a new song in practice, then put an iPhone in the middle of the room and play the new song… very, very quietly. The built-in mic on the iPhone is designed for speech, not heavy metal, so every recording we would make at full volume would be hopelessly distorted. Drums and bass were distorted and louder than everything else, and you couldn't tell the two guitar sounds apart.

Now with the MV88, we do the same thing, but we get a great-sounding recording even when playing at top volume (which we definitely do). This is because the MV88 can handle 120db, which is loud enough to handle the front row at an AC/DC concert (which it has) without distorting. Also, because it is an adjustable stereo microphone, I'm able to place the MV88 in our practice room and adjust the stereo width so it records one guitar on the left side and one on the right side. This makes it much easier to hear what each one is doing.

Once it's recorded onto the free ShurePlus™ MOTIV™ app, I convert it down to a smaller AAC file with just a few touches and post it to a Dropbox folder that we all share. It's in the cloud and streamable before my drums are packed up, and we can listen in our cars on the way home.

I can't overstate how awesome the recordings are. We use the Loud mode DSP preset for all our band recordings. It applies a subtle EQ curve as well as some compression and limiting, so the recordings sound polished. I don't have to use my computer to clean them up, and I no longer have to cringe listening to distorted mono recordings. Nutshell: This mic has vastly improved my band practice experiences. I don't know how I ever lived without it.

To get a better sense of how easy it is to use the MV88 at practice, check out this video of two very different bands recording their practices, the first using Flat mode and the second using Loud mode, like my band.

#2 The Moment of Inspiration

Inspiration is fleeting and can strike at any time. I'd bet most musicians and creative types have called their own voicemail to capture their thoughts or sing a melody before it escapes them.

With today's tools, everyone has a multi-track recording studio in their pocket. An iPhone or iPod with GarageBand and an MV88 can cover anything you can throw at it. Here's what to do in those fleeting moments:

Garageband has some great virtual instruments that allow you to sketch out a song with different parts quickly and easily, or simply jot down an idea and come back to it later.

Ever seen a cell phone video of a concert you went to? You click to watch and relive the memory or show a friend how awesome the band was, but unfortunately, the built-in cell phone mics can't handle loud PAs, so most of the great concert footage on YouTube sounds fuzzy and distorted.

The same way it's great for band practices, the MV88 captures great audio at concerts, no matter how loud. It even has a hinge and rotatable barrel so the left and right sides of what the microphone picks up match up with the left and right side of the video. It's fun to be able to relive your concert experiences, or at least give people who couldn't be there a representative video clip.

I've made some great live recordings by dropping my iPhone and an MV88 in my front shirt pocket. From there, I just enjoy my beverage and forget I'm recording. No need to hold a phone over my head for an hour.

One caveat: Please record responsibly and respectfully. Make sure the band and venue are cool with recording live performances.

Keep in mind that the MV88 is useful in capturing great audio for any video—not just concerts. I've grown accustomed to carrying mine with me all the time, so I never miss the opportunity to capture video spontaneously. Recently, I was lucky enough to check out an English premier league soccer match, and I got some amazing-sounding video of the giant crowd all chanting and singing together. Because it's stereo, the MV88's recording faithfully captured the feeling of being in the middle of this massive crowd. On the same trip, we captured some great-sounding video of street performers in different neighborhoods, a bustling open market, busy streets, et cetera.

The MV88 plus an iPhone is like a high-quality video rig in your pocket. You don't have to compromise quality to get convenience.

Perhaps the best feature of the MV88 is the fact that all the processing lives on the mic itself. This means that you can dial in whatever settings you like with the ShurePlus MOTIV app, then use a different app like you normally would, with no extra setup required. This has essentially future-proofed the microphone so it can be used with any app that supports external microphones.

For instance, when we launched the MV88, streaming services like Periscope and Facebook Live weren't available. It's easy to promote a gig the day of with these apps and the MV88, though. Additionally, we've found that the MV88 is a great fit for industry-specific apps like Tieline, which is used by NPR and other radio and TV broadcast companies so a reporter can dial into the studio remotely. We don't know what new app or service will come next, but if it can benefit from a better microphone, the MV88 will be ready and able to assist.

Like any piece of technology, seeing (or hearing) is believing. You've got to hear for yourself what this little mic can do. It's small, but it sounds huge. And at only $149, it fits in your pocket without burning a hole in it. Check out the sound samples on our YouTube channel and on the MV88 page on shure.com.