When sound makes a difference at United Nations Office in Kenya 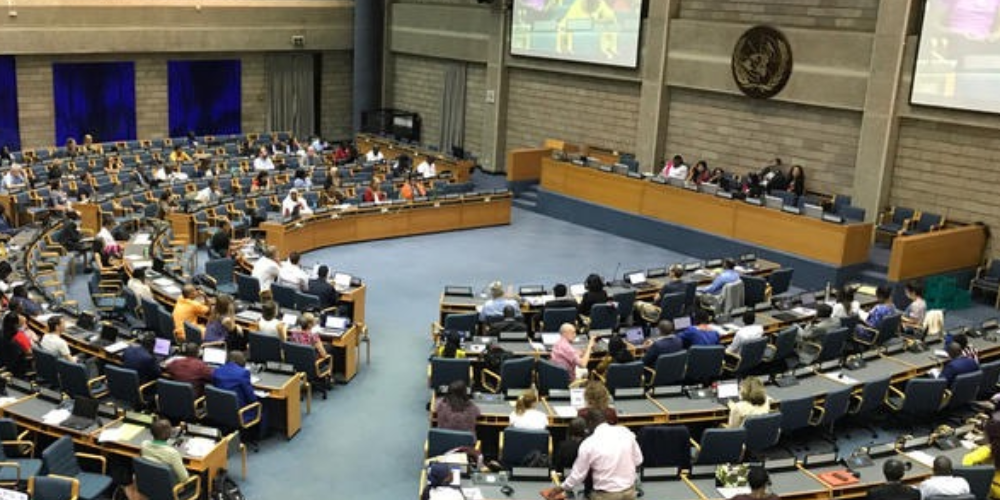 The United Nations Office at Nairobi is one of four major United Nations office sites where numerous different UN agencies have a joint presence. Established in 1996, it is the UN's headquarters in Africa.

A huge challenge is to provide a system that is flexible, as the seating layout changes according to the meeting objectives and requirements. Another challenge is how to integrate all of this in a simple way so that local technicians can easily implement all these changes.

Conference system that is flexible to attend meetings that take place at the UN complex throughout the year, and can be integrated to attend large assemblies such as UNEA-4 where over 2,000 people gather at the same venue and discuss among

Integrated conference system where participants are identified by electronic plates, as well as the software that manages the system, ensuring equal speech time for everyone, identification with sending metadata for broadcast and recording, and integration with robotic cameras ensuring when any participant speaks he is captured with high quality audio and video.

The United Nations Environment Programme (UNEP) is the leading global environmental authority. The Assembly (UNEA), which represents the world’s highest-level decision-making body on the environment, results in resolutions and a global call to action to address the critical environmental challenges facing the world today.

UNEA brings together over 2000 participants from over 190 nations. Heads of States and Government, over 200 ministers, Heads of United Nations, Multilateral and Bilateral Agencies, Chief Executive Officers, Civil Society and Private Sector representatives. UNEA4, the most recent meeting of the UNEA, took place at the UN headquarters for the African continent, in Nairobi, Kenya.

Shure conference systems are featured throughout the entire UN complex, which facilitates more than 4,000 meetings per year. The main halls of the complex function as independent spaces, and are combined for the UNEA, forming one large room with capacity of more than two thousand people.

To understand the complexity of this type of event, we must first explain the elements of a conference system: This is a type of system in which each participant has a microphone with loudspeaker and channel selector with headphone that they can use to talk with and listen to the other attendees directly or via interpreters. For the UN, the conference units (custom DC6990P) are configured in dual delegate mode. Additionally, the UN uses electronic name signs (MXCSIGN) for the participants which allow each country delegation to find its location (or its seat) based on the name that appears on the plaque - organized alphabetically.

All of these components are connected to a central unit (DIS-CCU) that is installed in the technical area. The powerful conference management software used (SW6000) determines the procedure parameters, as well as all of the meeting settings.

Using SW6000, conference technicians are able to manage the agenda of events, as well as voting sessions and speech times, and they can open or close any microphone in the system, as well as program the name plates of each delegation.

For the recent UNEA, the operation mode was set to manual, so the President could open and close his microphone as well as that of any other participant in the hall. Delegates would request to speak and their microphones would be opened by the conference technician when the President would give the word to the requesting delegate. One of the challenges with so many participants is to manage meetings according to schedule. At UNEA, a few important people like the President of France, Emmanuel Macrón, and of Kenya, Uhuru Kenyatta, had no time limits for their speeches but ministers and other representatives had three minutes to speak with an additional one minute grace time.

The SW6000 Conference Display Application (CDA) was installed on a computer next to the podium clearly showing a speech time counter, allowing the speakers to monitor their speech time and be clearly warned 1 minute before the time was ending. When the speech time counter reached 4 minutes, the microphone was automatically turned off by the software, thus ensuring equal time for all and that schedules were kept.

Another challenge is to capture live video of speakers. An automatic camera tracking system receives microphone on/off events from the DIS-CCU via TCP/IP and controls a total of 13 PTZ robotic cameras. All seats in the hall have camera presets for at least two cameras so that camera movement is not displayed.

A video mixer is set up to mix camera video with the video from a PC running SW6000 CDA so that the name of the speaker and the remaining speech time is displayed at the bottom of the large hall displays, streamed on the internet and recorded.

The chairman and the directors on the podium running the meeting have touch screens displays with motorized lifts, video feed to view who is speaking and for the President seat the ability to use the SW6000 Conference User Application to view speaker and request lists, view agenda and voting results and also a visualization of the room pictographic diagram (Mimic) with colored dots allowing him to see where all the microphones are and quickly understand where the delegate with the open microphone is positioned in the room.

When having delegations from over 193 countries, one of the most sensitive aspects of this assembly is audio quality and speech intelligibility for people to be able to understand each other despite language barriers. When delegations from 193 member states of the UN participate in the meeting it is necessary to offer high quality simultaneous interpretation for several languages such as the six official UN languages English, Spanish, French, Russian, Arabic and Chinese, and in some cases other languages such as Portuguese and Italian.

The meeting participants were able to choose the language they preferred to listen to through the approximately 2000 channel selectors, which are part of the conference system, installed in the tables of each delegation.

Among the technological innovations that were used at the event, the UN also acquired the first 50 units of the wireless conference system (MXCW) for the African continent. The wireless system was combined with the wired system through network interfaces (ANI4IN and ANI22) connected to the transceiver antenna (MXCWAPT) via Dante to provide up to 6 interpretation languages in this mobile kit that could be used in ad hoc meetings.

Such a grandiose event could not have a better outcome than a perfect technical performance. The whole system behaved very well without failures or problems which has made me believe that the secret of any project in the end is always a balance between proper planning, well done installation, and up-to-date maintenance.

In conclusion, Conference systems with high intelligibility and quality are important not only to global institutions like the UN but to the entire planet. It is possible to say that a well-made installation using high quality audio equipment improves the understanding between nations when it is important – something which is beneficial for all of us.