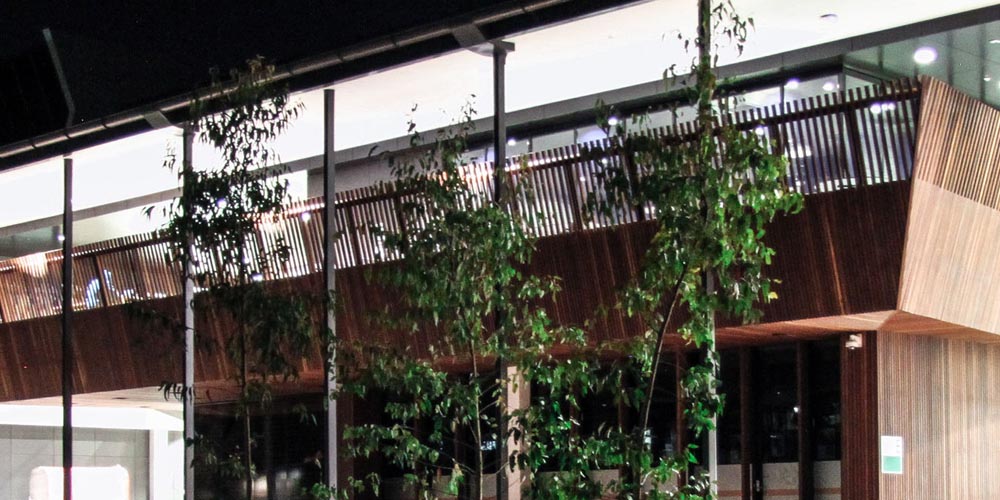 The University of the Sunshine Coast is one of Australia’s fastest  growing universities and recently built a $33 million Learning and  Teaching Hub, incorporating the latest Shure Microflex Wireless (MXW)  hardware to provide seamless communication for users as they roam  throughout the building.

“The audio signals had to be routed amongst three separate areas  within the building,” explained Peter Coman, Managing Director of  InDesign Technologies, which designed the audio visual and advanced  technology systems. “Even though it was one building, the long distances  between areas posed significant problems when transporting the audio  signal, so we specified the Shure MXW range of wireless microphones  using Dante as the transport protocol. So for example, if the audio from  the Immerse Studio needed to be recorded, it could easily be  transported via Dante to the Nursing Simulation recording suite.”

“USC had been using alternate brands but with the looming changes to  the digital spectrum they had to make a change to their entire wireless  microphone strategy in order to comply,” said Peter.

InDesign arranged for an evaluation process that included six  different vendors. After an extensive evaluation period USC found the  Shure range of wireless microphones to be the perfect fit and have now  become the new standard for all of their current and future spaces.

The advantage for InDesign Technologies by specifying the Shure MXW  is that only two Dante inputs were required on the digital signal  processor (DSP) for all thirteen wireless microphones. “In the Nursing  Simulation suite alone, we already had thirty-one physical microphone  inputs, so the last thing we wanted to do was add another thirteen to  the already heavily populated DSP,” said Peter. “All we had to do is add  two MXWAPT8 wireless access point transceivers to cover all of the  microphones, as each transceiver has eight channels.”

Shure Microflex Wireless provides a complete system of products  including wireless microphone transceivers (a mix of transmitter and  receiver), docking chargers, access point transceivers and multi-channel  audio networking interfaces. The components with rechargeable  lithium-ion batteries provide in-unit rechargeability and up to 9 hours  of battery life for MXW1, MXW6, and MXW8, and up to 15 hours for MXW2.  With flexible, elegant form factors (hybrid bodypack transceiver with  integrated omnidirectional microphone, as well as handheld transmitter,  boundary, and desktop gooseneck transceiver), it is the ideal choice for  capturing and managing vivid lifelike sound in any managed AV  environment.

“They really liked the Shure products, even little things like the  on/off button on the handheld microphones, a feature which had  previously caused countless user problems with other brands,” added  Peter. “There was a similar issue with the lavalier microphones, and  although it may not sound like a significant problem, the USC support  team kept getting calls asking how to turn them on and off!”

“It all worked perfectly and the client is very happy with the Shure  solution,” commented Peter. “It ticks all of the boxes for USC and for  us, as designers, using MXW was just perfect. It would have been a  nightmare to do it any other way. Whilst the MXW microphone solution may  cost more compared to standard wireless microphones, they actually  saved us money because our DSP’s were much smaller with less physical  inputs.  Also, with all of the equipment we needed to install into the  AV / Communications room we were fast running out of rack space, if we  had used standard microphones I honestly don’t think that we would have  been able to fit it all in.”

The Shure MXW solution was also deployed at USC’s Gympie Learning Hub, which included seven MXW microphones and one transceiver.