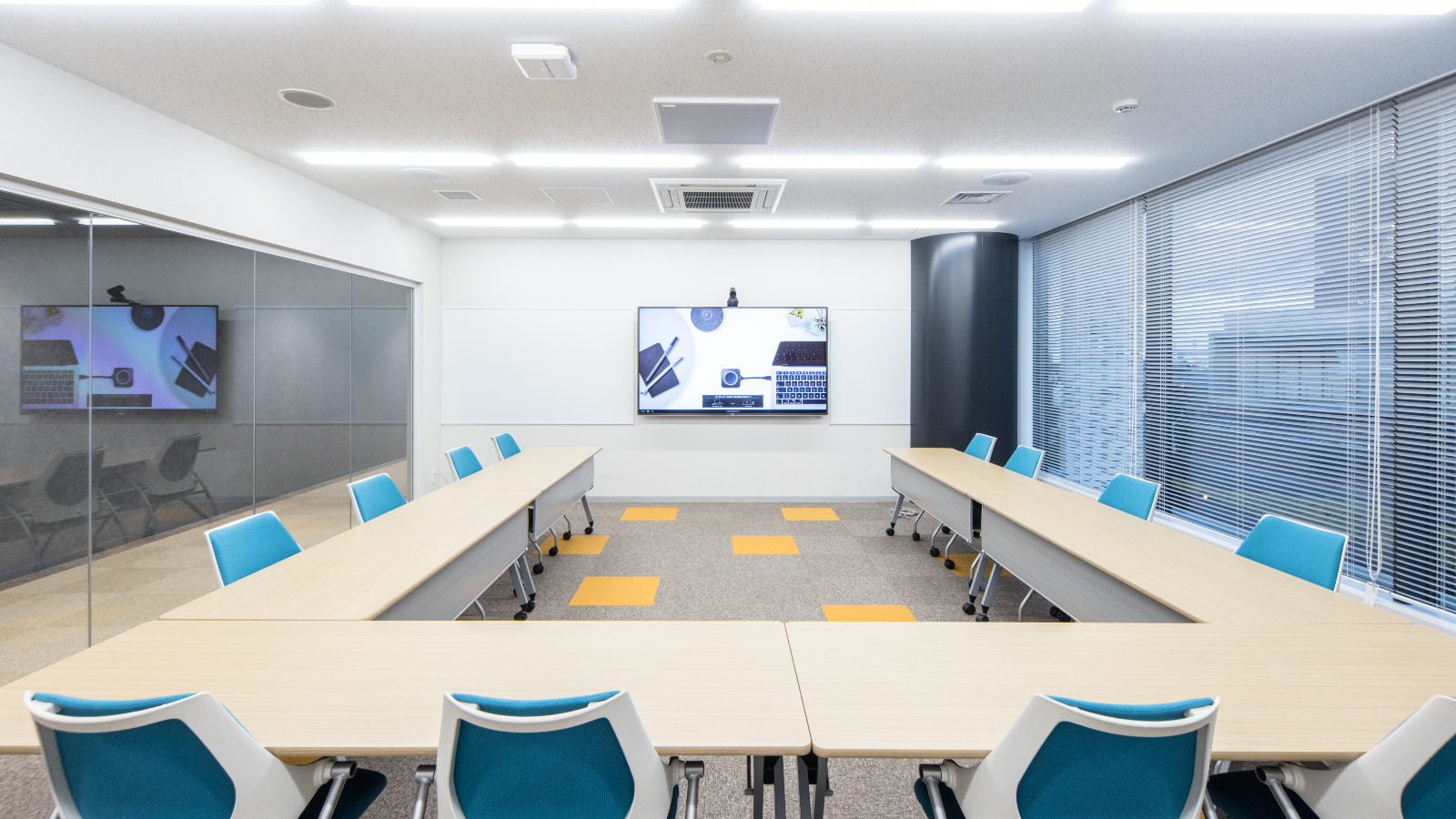 NGK SPARK PLUG Co., Ltd. manufactures and sells ignition parts and related products for the automotive market as well as sensors and ceramics for a wide range of other non-automotive applications.

In August 2021, the company moved into a new office building, named N-FOREST, to serve as a central administrative & collaboration space next to its plant in the city of Komaki, Japan. Alongside this major project, the decision was made to aggregate all existing conference rooms which were scattered across the plant site into this new building and equip all rooms with modern web conferencing capabilities.

In line with the Japanese government’s “workstyle reform” which aims to promote remote work, NGK SPARK PLUG has seen an increased need for online conferencing. While dedicated in-room systems were available to connect between a few select conference rooms, remote participants often had difficulties dialing-in from home.

In those rooms that didn’t have a dedicated system, users had to bring in the equipment and set it up themselves. Not only did it take a lot of time and effort to prepare a conference call, but users also often mixed up cables and the next person wouldn't be able to get it connected, which caused a lot of support calls to the administrative team.

To eliminate this problem, a configuration was desired that could support web conferencing with remote workers and didn't require complicated setup. As the new office building brought a variety of conference spaces under one roof, NGK SPARK PLUG was looking for flexible and scalable solutions that could adapt to different room types and use cases.

A selection of Shure microphones was implemented in a large hall (combined rooms), large and medium-sized conference rooms, and boardrooms to support web conferencing and other audio needs at the new N-FOREST office building.

The large auditorium-like hall, which can be separated into six individual meeting rooms through partitions, was equipped with an 8-channel SLX-D Digital Wireless System with handheld and bodypack transmitters, an antenna distribution system so speakers can move around easily, and rechargeable batteries and charging stations for battery management.

One large meeting room which can be merged into the hall and another medium-size conference room each have a 16-channel Microflex Wireless System with handheld and boundary transmitters to support both presentations and discussions.

A Microflex Complete System of 30 Portable Conference Units with 16-inch Gooseneck Microphones was deployed at the executive boardroom. The units can be operated simply with the push of a button. Additionally, a 2-channel Microflex Wireless System with handheld and bodypack transmitters is available for presenters.

Across all rooms, IntelliMix P300 DSPs provide audio processing and integrate the microphone solutions with Barco ClickShare for Conferencing to provide a simple and intuitive solution for users.

From a system design perspective, the variety of options in Shure’s product portfolio provided a good selection and allowed the company to choose the most suitable system combination based on their budget and scale.

With the construction of the new N-FOREST office building, NGK SPARK PLUG accomplished the transition from dedicated videoconferencing systems to flexible web conferencing solutions fit to accommodate remote workers. The number of support calls for setup and troubleshooting has fallen sharply since the company has adopted the new systems.

The Business Support team highly regards the sound quality and high reliability of the Shure microphones. Compatibility and certification with the company’s chosen peripherals also offer confidence and peace of mind. The IntelliMix P300 processor is certified for Barco ClickShare, ensuring everything connects and functions properly.

Shure has a rich product lineup. Even though there are a lot of rooms, we could narrow it down to a single brand while still addressing the various needs.

For users, technical malfunctions are the biggest fear in meetings. The high reliability of Shure products is a great help and gives us confidence.

-- Why did you build this new office building at your Komaki plant?

ONO: In our 2030 Long-Term Management Plan, which was released in June 2020, we announced a change in our business portfolio. Creating innovation is essential for us to look to the future and generate new core products. N-FOREST was born as a symbol of that. The office sectors from all the buildings of the Komaki Plant are now aggregated here. We are free to change desks so we can work where and how we want. We think this will prompt inter-departmental collaboration and lead to the creation of new business.

-- How did your integrator, VTV JAPAN, support you in this project?

NISHIMURA: VTV JAPAN helped us to not only introduce suitable equipment and design the system, but they also had helpful knowledge of user behaviors and needs. They approached conference room systems with total communication in mind, so we felt confident that they could create an optimal proposal for our new project.

NISHIMURA: We initiated the N-FOREST project before the COVID-19 pandemic, but we had already set a goal of at least 30% remote work. We thought there would be an increase in employees joining meetings from home and decided to focus mainly on a web conferencing solution to prioritize convenience and low barriers to use.

-- Did you already have a vision of the system you wanted?

NISHIMURA: We had a vague idea of a system that would be simple and easy for anyone to use, but nothing definite. We shared our wishes with VTV JAPAN and they gave us a few options.

YANAGIDA: We translated their wishes into something more tangible and put together suggestions based on how the conference rooms would be used. We had three alternatives (A, B and C) sorted roughly by budget and scale. For example, A would be good for this room, or B and C should be combined for these other rooms.

-- Why did you choose Shure?

YANAGIDA: The biggest reason was reliability. Shure products almost never malfunction, so I can recommend them with confidence. Another reason is that Shure has a rich product lineup. Other manufacturer options are often limited, so you need to combine multiple brands and there are a lot of questions when designing a system. In this project, even though there are a lot of rooms, we could narrow it down to a single brand with Shure while still addressing the various needs.

YANAGIDA: I wanted them to see and try as much equipment as possible, so Shure brought a lot. The purpose of the demonstration was clear, so it went smoothly.

ONO: To some extent, it was just a matter of confirming what model options to adopt. For example, when choosing the length of the gooseneck mics for the executive conference room, it was a great help to be able to borrow them for a week so the Director and project owner could personally handle them first.

OGAWA: We also listened and compared the MXA910 ceiling mic to desktop mics. The sound quality was comparable, but it had big advantages over desktop mics in that the users don’t have to worry about accidentally touching the mics, or mics picking up vibrations when they type on computers, and so on.

NISHIMURA: Desktop microphones have the disadvantage that the sound quality that reaches the listener varies with the placement of the mic, but that doesn't happen with a ceiling array. In addition, the user being able to use it without having to operate it is another advantage.

-- Tell us more about your setup in the Large Hall.

YANAGIDA: In terms of seating, it can hold about 200 people. Ordinarily, partitions are set up and meetings can be held with a monitor and a wireless mic in each room. With the partitions removed, it becomes a large auditorium-like space where they can hold lectures and so on. In that case, the idea is to use the monitors as intermediate monitors for people sitting in the back.

We chose the 800 MHz SLX-D system for this room. As mentioned before, the breadth of Shure's product options was a factor here too. Just for 800 MHz, there are three different products, so we were able to choose one with good sound quality within the budget.

-- What are some of the operational innovations that you’ve deployed?

ONO: We asked our integrator for something that anyone can touch and understand. They provided us with a system that you can turn on and off with a simple switch, so you're ready to have a conference.

YANAGIDA: Simplicity was very important, so we designed a system with a single power switch. There's nothing to touch but the switch; it turns on every device. In the medium conference rooms, all the equipment is hidden behind a display, with only that switch exposed. After that, users insert a Barco ClickShare button into their computer's USB port, and they can wirelessly connect to a camera, mic, and speakers connected to a ClickShare base unit. We also prepared a simple user manual and placed a copy in each room.

-- How have your users reacted to the new system?

ONO: We handle problems, so we don't usually get positive reactions in our work (laughs). If there's a problem, they'll always ask us, and those inquiries have decreased drastically. That’s the biggest proof that the system has improved.

NISHIMURA: I'm not that knowledgeable about technology, but I think that Shure's product designs are very stylish, and I get a little fired up when there's a Shure mic. It motivates me.