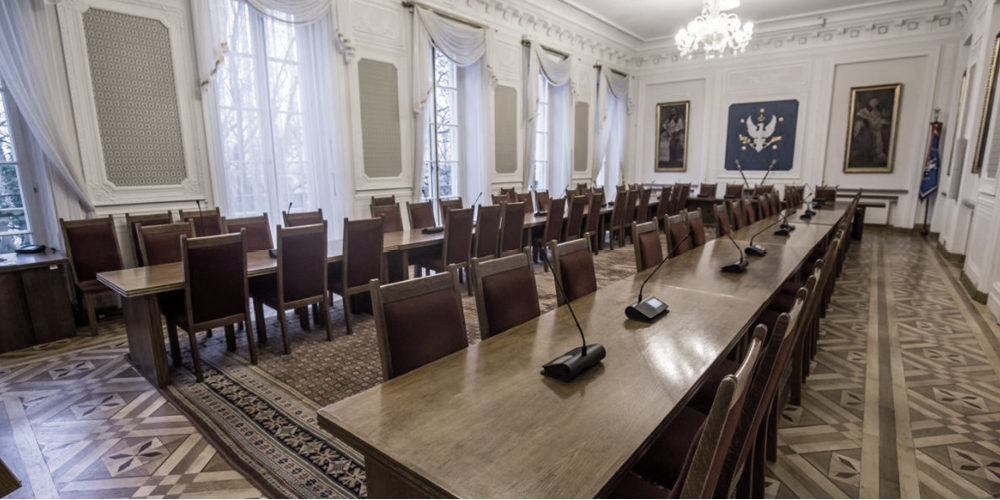 The University of Warsaw, established in 1816, is the largest university in Poland with over 50.000 students, 21 faculties and a total of 126 buildings across Warsaw. The University recognized as the most prestigious in Poland and also ranked as one of the best in Europe.

The main campus is located in the most famous street of Warsaw and it is surrounded by palaces from the 18th century. In this building, there are 2 halls (The Gold Room and the Senate Room) where the most important celebrations of the University take place.

Due to the very diverse nature of events organized in the Senate Hall such as conferences, meetings, readings and the annual meetings of the University Senate, a decision was made to upgrade the hall with a state of the art AV solution. This is partly due to the previous conference system that was installed did not suit the present-day requirements as it was being adversely affected by the growing RF environment density.

The increasing number of devices communicating in the 2.4 GHz band caused constant problems. For this reason, the university started looking for a new system that would primarily offer reliability and a stable transmission. Given that this is a historic building with an exceptional decorative interior architecture, one thing was clear from the beginning; the system had to be wireless. Additionally, as the layout of the room is constantly changed depending on the event taking place, eliminating cables all together would make this task a lot more seamless.

Although various models and wireless technologies in the market were considered, most of them didn’t ensure stable transmission or the construction of the transmitters did not meet the requirements of the client. One desktop is usually used by up to six delegates who pass it on to each other during meetings and conferences. It is often held by the most protruding element, which is the gooseneck microphone. Therefore, the method of mounting the microphone in the desktop was very important. Many of the tested systems were equipped with low-quality plastic microphone sockets, which could cause a lot of problems in the future, and it could be associated with accidental disconnection of the microphone during the conference, introducing unnecessary nervousness and stress among the participants.

After a whole series of tests and trials, the University of Warsaw decided to choose the Shure Microflex Complete Wireless (MXCW) solution with 30 MXCW640 units that successfully facilitates the communication of several participants in conferences and meetings taking place in the hall.

Each MXCW640 desktop is equipped with a securely fastened microphone with a light ring indicating its status and a set of physical buttons that allow easy reporting. They also have a speaker, two headphone outputs and a touch screen where the participants can view the guest list, vote, track voting results and send text messages between units. There is also an NFC ID card slot on board of each desktop, which allows the delegate to easily log in to the unit, confirm their presence, and recall individual settings related to the appearance, screen layout or individual functions.

The transmission between desktops and the central unit is encrypted using the AES-128 key, ensuring the privacy of the meeting and virtually preventing eavesdropping on the conference. A special transport case has been prepared upon the request of the client to store and transport the units without disconnecting the gooseneck microphones. This made the process of packing and unpacking easier and less time-consuming.

With the implementation of the MXCW, the Senate Hall now has a conference system that works flawlessly with constant and stable transmission, without endangering the 18th-century Baroque architecture of the building. “The whole system is very easy to use and offers trouble-free, stable work. The tests allowed us to choose a solution that meets all the requirements”. says Andrzej Szeliga, the head of the audiovisual techniques department. The technical team adds that the system works flawlessly and thanks to its dual-band (2.4 GHz and 5 GHz) operation, it always offers stable transmission.

The system was implemented in cooperation with Polsound (Shure Distributor in Poland) and VC System (Polish system integrator).