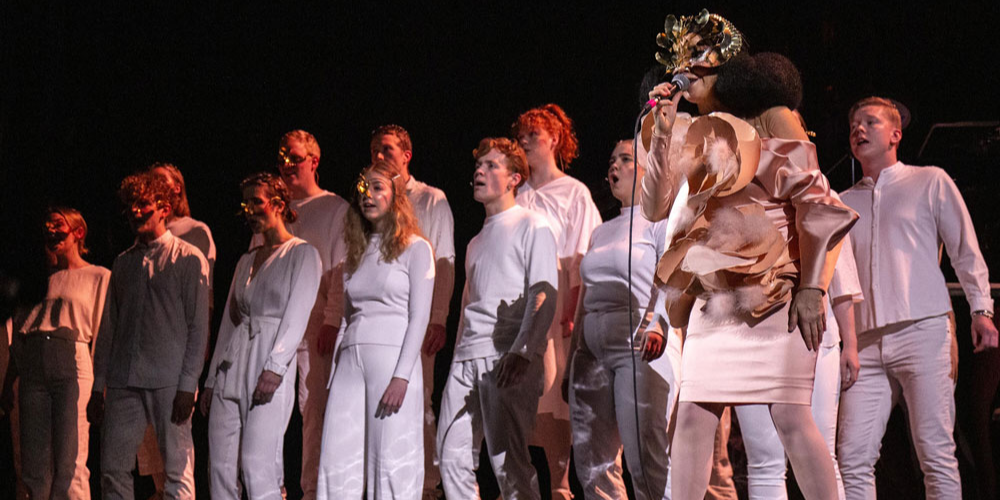 The production is a theatrical experience which toured arenas across Europe, including London’s The O2, and took up residency in New York City’s ‘The Shed’ and Mexico City’s ‘Parque Bicentenario’. The show, described as Bjork’s most elaborate stage concert yet, included a 50-piece Icelandic choir, a live band including a 7-piece flute ensemble, a harpist, a percussion section, water drums, a magnetic harp and a number of bespoke instruments which were implemented in the immersive sound stage design. The show was devised and rehearsed at an Icelandic lighthouse and the Backstage Centre, a world-class production facility in Essex. With the show evolving daily and presenting unique challenges, the crew were required to work closely together and adapt quickly to changing specifications. As the kit supplier, the journey began with the wider team a couple of years back”, comments Chris Jones, Director at Southby productions. “When it was decided the show would be immersive, that's when the sound engineer, John Gale, reached out to Southby for their experience. I suggested we demo all the kit together, so we set up a system in a venue and were really able to trial the whole concept. This proved invaluable, as the show was so unique; all departments had to work very closely together to pull the whole thing off.”

Bjork is an innovative artist who is known globally for her creativity and distinctive live performances, with a hands-on approach to determining all the finer details of the sound of her shows. The Cornucopia production was designed by Bjork around a soundscape and opened with a 50-piece choir, all using Shure TH53 TwinPlex headsets allowing them to be hands-free for choreography and movement. John Gale, Front of House engineer for the tour, comments: “The role of the choir grew quite significantly as the show evolved. They ended up being in more songs than originally planned as they were the same choir that Bjork sang with as a child and she never sat still, Bjork loves new technology and is happy to embrace it. The show was a constant process of refinement and the TwinPlex headsets used on the choir allowed me to get so much more level and consistency compared to overhead microphones, they provided a solution which was scalable and the sound quality of the choir was so much better with the TwinPlex headsets.”

Bjork’s preference is to make the ‘technology disappear’ so that the audience can focus completely on the performance. John Gale continues: “The sound on the TH53’s was very open and natural-sounding, therefore, even when turned up very loud the perceived choir sound was transparent and unamplified.”

Built to Stand up to the Toughest of Touring Conditions

Moving from venue-to-venue and country-to-country, the TwinPlex headsets are built to withstand the toughest of touring conditions. “The headsets are incredibly durable,” John Gale explains: “We had absolutely no issues and no breakages, which gives us all peace of mind when on tour, as they are most certainly up to the task. We had a number of soloists in the choir and they had the confidence that in their moment, their microphone was going to work.”

After some training the choir were able to fit their own headsets before going onstage. Dom Gallagher, RF Engineer, comments: “The headset cases really came into their own for each member of the choir to store their individual kit. The TwinPlex cable is resistant to kinking and is particularly helpful when you've got performers handling the kit. The headset boom adjustment is simple and quick to adjust for any last-minute adjustments in low-light before entering the stage.”

The Cornucopia set design is a big metal stage of varying levels, a large LED wall and a solid sealable reverb chamber. all of which can cause interference, block RF transmission and needed consideration when setting up the wireless equipment for the show. Dom Gallagher, RF Engineer, explains: “With careful antenna placement to minimise any potential problems and the occasional flute solo from the audience the Shure Axient Digital System was stable and performed each time. I conducted my coordination with wireless workbench which allows me to build a picture of the venue before arrival, imports from an RF explorer, Axient receiver or the spectrum manager allowed me to check everything was as I expected. One of the great aspects of Wireless Workbench is the support for other manufacturers, so it's easy to pull everything into one platform. The timeline feature was also particularly helpful as it records channel status information over time, which is perfect for checking stability and dealing with any potential threats to RF stability.”

There are plans for the show to continue to tour other countries including Iceland, Russia Japan & Australia when it is safe to do so.