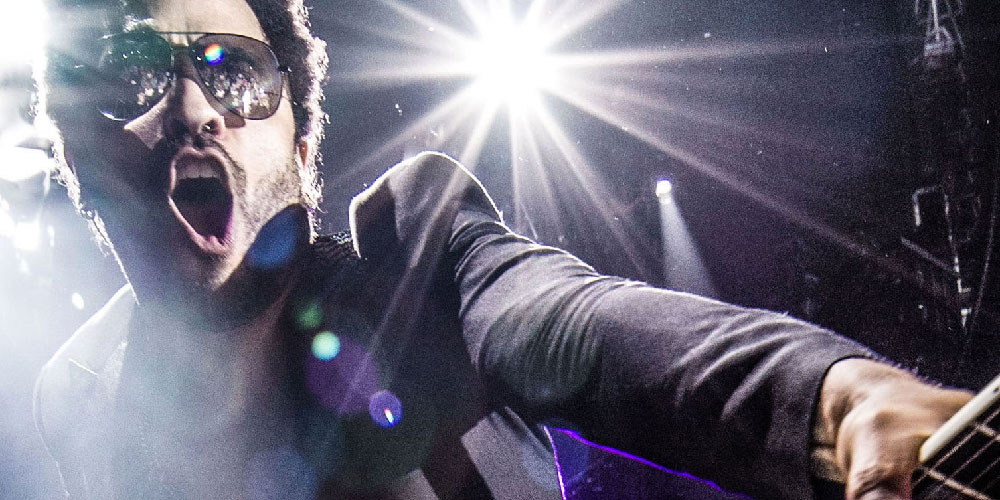 After 25 years of resisting wireless systems, I am finally free from  my beloved cables without sacrificing the organic tone of my guitar and  amplifier

Throughout his career, Lenny  Kravitz has always insisted on accuracy in his guitar tone. “He works  hard on getting everything just right, especially his guitar,” says Alex  Alvarez, Lenny’s guitar tech of 23 years. “He’s just insistent on his  sound, which is why he never went wireless. Every time we would demo  something, it would never meet his expectations.”

“It started as a conversation with Lenny,” Alex relates. “The subject  of wireless guitar came up, and I told him there was a system I wanted  him to check out. He said, ‘We’ve been down this road before. I would  like to, but you know if it doesn’t sound right, I’m not going to do  it.’ So I called Lance at Tour Supply to set up a demo.”

With rehearsals being in Miami, Lance Wascom, CEO of Tour Supply, had  two days to set up the requested shootout. “We showed two Shure  systems, Axient and ULX-D, plus two other major brands,” he says.  “Everything had to come together quickly and accurately, so I flew to  Miami to set up the demo. Being that Lenny and Alex are such great  clients, we really wanted to offer every level of support possible.”

Axient was the system that Alex Alvarez had his eye on from the  start. “I had heard about it, both from Shure and from other guitar  techs,” he notes. “The fact that it can detect interference and change  frequencies on its own made it really attractive to me, but I knew that  if the sound wasn’t perfect to Lenny’s ears, he would just stick with  his cable. But since we already use Shure PSM® 1000 in-ears, I figured  it was worth a try.”

The first day of rehearsals, Kravitz was not available, so his  longtime guitarist and writing partner, Craig Ross, did the initial  testing. “Craig really liked the sound and said, ‘Man, Lenny’s got to  approve this.’ So we set up two more units for Lenny to check out the  next day, and he was very impressed with both the sound and the  technology. It turned out to be an easy decision.”

Asked to comment on his adoption of the Shure Axient guitar system,  Lenny Kravitz stated, “After 25 years of resisting wireless systems, I  am finally free from my beloved cables without sacrificing the organic  tone of my guitar and amplifiers.”

Being Axient certified, Tour Supply’s Lance Wascom took on the task  of educating the production crew on the system’s extensive monitoring,  control, and frequency management capabilities. Along with Alex Alvarez,  Wascom conferred with monitor engineer Josh Mellottsi on how to best  integrate the new systems into the Kravitz backline.

“I love the technology,” says Wascom. “Axient tends to blow people’s  minds. To see their reaction as it switches channels by itself, and to  see how excited the monitor engineer gets when you coordinate all their  frequencies in less than a minute… it’s just a lot of fun! It’s  especially gratifying to know that you’re making an impact on the crew’s  day-to-day workload. Frequency coordination and monitoring can be time  consuming and stressful. Axient automates much of this, which saves time  and allows the guys to focus on other tasks. In that sense, Axient can  be as much as a ‘win’ for the crew as it is for the band.”

While the three Axient receivers sit in racks atop each of the guitar  and bass rigs, the tour’s total wireless package is networked together  and operated from Mellottsi’s monitor position. Frequency coordination  is handled through Axient Spectrum Manager and Shure’s Wireless  Workbench® software. Each day, Mellottsi scans for available frequencies  and deploys them through the system.

“Between microphones, in-ears, and now guitars, we have so many  frequencies that it’s best to have one person manage it all,” says  Alvarez. “Of course, what I like best about Axient is that it always has  spare frequencies ready to deploy in case there’s a problem. I remember  the first time the system changed frequencies on the fly, and nobody  noticed anything on stage. Very awesome.”

Alvarez is also very enthused about Shure’s rechargeable battery  system, which is used for the six Axient transmitters as well as the  band’s 11 channels of Shure PSM 1000 in-ears. “That’s another huge  saving grace,” he enthused. “We get far more time out of a full charge  than alkalines, and the system actually monitors remaining life down to  the minute, so there are no surprises. We used to spend $10,000 in  batteries for each leg of a major tour, so it’s not just the responsible  thing to do, but they also pay for themselves.”

Having used the system on the Lenny Kravitz Strut tour of Europe,  Alex Alvarez reports the Shure Axient guitar systems have been a total  success. “We’ve literally had zero technical problems with the system,”  he reports. “But with Lenny, it always comes back to the sound. He  wouldn’t go wireless unless the system didn’t change what he’s worked so  hard to sound like. Shure Axient does that for him.”