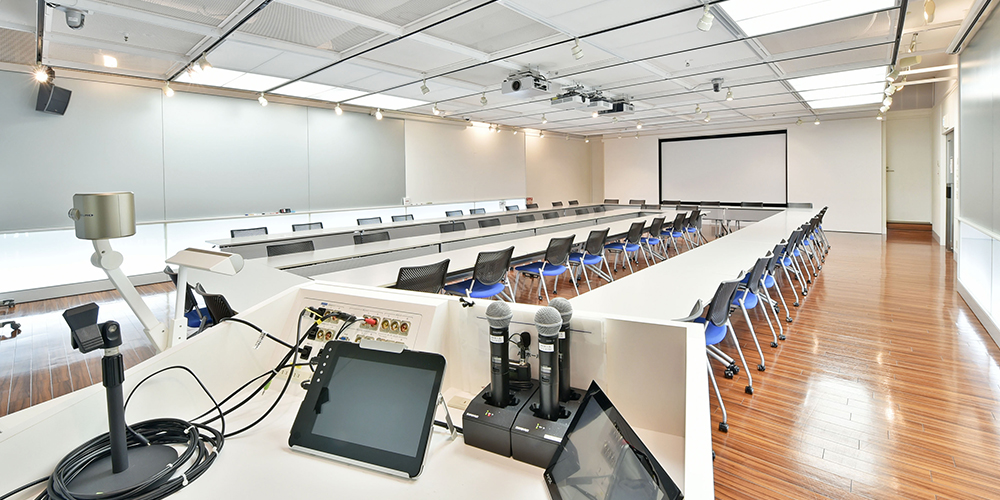 Tokyo, December 15, 2015 – With almost 160 years of history, Keio University is one of the oldest institutes for higher learning in Japan, and with its commitment to excellence and orientation towards the future, it ranks among the World’s Top Innovative Universities today. The Keio Shonan Fujisawa Campus (SFC) was established in 1990 with the mission to offer education and research based on an entirely new concept, training students to resolve complex social problems by integrating technology, science, design and policy. Celebrating its 25th anniversary this year, the campus utilizes a nationwide leading educational support structure that provides students an advanced, state-of-the-art IT environment to design and realize research projects, and to carry out hands-on lectures. The entire campus has Wi-Fi access and is outfitted with cutting-edge AV equipment, 3D printers, and similar technologies.

In the past 3 years, SFC has invested in ongoing audio system upgrades and equipped each classroom with Shure wireless technology. The campus now utilizes 68 channels of the ULX-D Digital Wireless System, and will increase this number in the near future. Mr. Isao Nagasaka, Supervisor of Multimedia Services, is in charge of all AV equipment on campus and provides insight into his decision to use ULX-D, its implementation, and actual use.

As the campus enjoys full Wi-Fi access at all areas, the 2.4 GHz band is limited to computer networks only, and microphone systems operating in this frequency range were automatically ruled out at the very beginning.

"In 2012, we did a first ULX-D installation in the Ω (Omega) 11 and 21 Classrooms. Ever since, we have chosen this system each time we carried out an audio system update" explains Mr. Nagasaka.

SFC decided on the implementation of ULX-D almost immediately after its launch in Japan in April 2012. On the initial reason for choosing ULX-D, Mr. Nagasaka stated that "Shure is used at numerous live performances, so it has an established reputation that we were well aware of. Staff members commented that it would be 'cool' if we could have Shure equipment in our classrooms [laughs]. And to be honest, after testing it, I was very impressed with the feel, design, and sound quality."

Scalability and wireless performance have greatly contributed to the system’s ongoing deployment across the whole campus. The microphones have to be able to operate flawlessly, even when utilized in adjacent classrooms. SFC is famed for its advanced IT environment, however all this equipment can cause significant RF interference. Mr. Nagasaka says "there should be absolutely no interruption to course instruction due to signal interference, so I was looking for a solution that would address these issues."

In addition to ULX-D’s rock solid signal stability, which has also proven unaffected by the installation of a large-scale 4K LED display at the θ (Theta) Hall auditorium earlier this year, the system operates extremely RF efficient. It allows to even further increase the number of simultaneously used microphones by switching to High Density mode. In Japan, active operation of up to 30 channels (in the non-licensed B-Band) is possible at the same time, and more than 60 compatible channels per frequency band in other Asian regions. By adjusting transmitter output power and re-using freque

ncies in different areas of the campus, SFC is able to use 68 channels of the ULX-D system today, and will continue to increase this count in the future.

Day-To-Day Use and System Management

Naturally, the main reason for Mr. Nagasaka's decision to use ULX-D was the system’s ability to cater for the practical application needs of a university facility. He explains that “faculty members and students remove wireless microphones from their original locations and bring them to other classrooms almost on a daily basis. In the past this caused a lot of chaos.” Since each ULX-D transmitter is paired with a dedicated receiver, SFC staff can now easily identify them, even if they have been moved to other venues.

With the SFC continuously upgrading and expanding their AV/IT infrastructure, ongoing maintenance was also taken into account. Ethernet networkability and the central control capabilities of the ULX-D system provides an efficient solution, and allow Mr. Nagasaka’s team to better concentrate their efforts.

"I frequently visit other universities to check out their facilities; at many of these schools, wireless microphones are carefully locked away and one must make a formal request to use them. However, at SFC we keep them at the teachers' desk, so that teachers or students may use the microphones as they please, whenever they need them. This allows greater flexibility and makes it a lot easier to conduct the courses,” says Mr. Nagasaka.

Realizing however that the equipment would have to withstand the rigors of constant use by many different users, durability of the hardware was also a big consideration. Mr. Nagasaka admits to having dropped the handheld transmitters countless times, but other than a small dent on the microphone grille, the units haven’t suffered any significant damage and still work perfectly.

When ensuring that multimedia equipment is available and ready for use at all times, battery management becomes another concern. ULX-D simplifies this by utilizing lithium-ion rechargeable batteries. Fully charged, transmitters have enough power for up to 11 hours of continuous use. When not in operation, or running low on energy, the microphones can be inserted into the docking charging stations on the teachers’ desks for quick and easy charging.

Besides the daily use in classrooms, the ULX-D system is also utilized at conferences and events hosted at the SFC. Here the option to encrypt wireless audio transmission adds another layer of security when privacy is of high importance.

Lastly, Mr. Nagasaka comments on the sound quality: "I believe the faculty members are very satisfied. The sound is totally different compared to the infrared and old analogue wireless systems we used in the past. Some people might think that it would suffice for microphones to produce an audible sound, but we were very picky on this point. Clearest reproduction of the speaker’s voice adds a sense of presence and is very important in delivering a quality educational experience. Which is why we decided to choose a true, top-of-the-line solution, even if we’re ‘only’ using it in a classroom setting.”